Stockholm comprises a jigsaw of fourteen islands where the Baltic Sea meets Lake Mälaren. Gamla Stan, the Old City, consists of the three islands at the heart of things. The main commercial and shopping districts – Norrmalm, Vasastaden and Östermalm – are north of here. South is Södermalm, home to off-beat boutiques, bars and restaurants. East is the “museum island” of Skeppsholmen. Beyond it, Djurgården was once the royal hunting ground but is now Stockholm’s outdoor playground.

The fastest but most expensive public transport into town is the Arlanda Express , which whizzes to Centralstation in twenty minutes (490 SEK /£49 return – though if you book online in advance, you can get a weekend return for 325 SEK / £32.50).

More economically, take an express bus. Flygbussarna and Swebus compete on the forty minute run to a terminal adjacent to the central station (99 SEK / £10 each way). 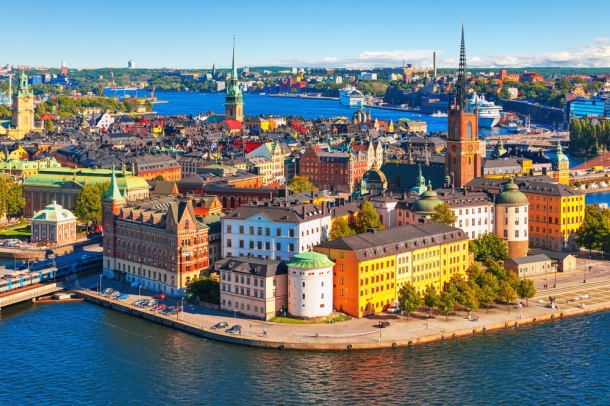 Located on Kungsholmen island, Stockholm’s City Hall, the Stadshuset, is where municipal architecture meets early Hollywood – and its tower provides a perfect platform for a panorama (arrive by 9am, when tickets (40 SEK / £4) go on sale.

The sumptuous Golden Hall (Gyllen Salen), decorated in eight million pieces of mosaic, is counterbalanced by the beautiful Blue Hall (Blå Hallen) (on official occasions, such as the Nobel Banquet, the city hall is closed).

… beside the water to the 13th-century Riddarholmskyrkan, the burial place of Swedish monarchs (open 10am-5pm daily from 15 May to 15 September for 40 SEK / £4). Move east to the heart of the city and thread your way through to the Stortorget, the oldest square in the city. It is flanked by merchants’ houses and the former stock exchange, now the Nobel Museum (Nobelmuseet) – which celebrates the global prizes for excellence (11am-5pm daily except Monday, from 3rd June 11am-8pm daily; SEK100 / £10).

Cross the square and head down Köpmangatan, the “merchant’s street” that brings you to Kopmantorget, a small square with a statue of St George and the Dragon. Bear left on to Österlånggatan up to the Royal Palace (Slottet) (arrive by 12:15pm, Sundays, 1pm) for the changing of the guard.

Lunch on the run

Whatever grows, swims or walks in the far north of Europe is on sale at the Östermalms Hall, including meats such as elk, bear and reindeer. Stockholm’s version of Liberty is Svenskt Tenn  – which has demonstrated form, function, flair and formidable good taste on the waterfront at Strandvägen 5 since 1927. Refuel in the opulent Tea Salon.

The century-old customs hall has been reinvented for the 21st century as Sweden’s photography museum: Fotografiska (9am-9pm daily, to 11pm Thursday to Saturday; 120 SEK / £12). Besides changing exhibitions, a strong attraction is the bar-restaurant on the top floor with superb views across the harbour – and, at weekends, live music.

Dining with the locals

“I want you to feel you’re in my house,” says Gustav Otterberg, the chef who fuses flame and fine food at the Ekstedt Restaurant at Humlegårdsgatan 17 (Tueday-Saturday evenings. The three-course menu (650 SEK / £65) features baked avocado, king crab and juniper smoked pike-perch.

At the heart of Gamla Stan stands the Storkyrkan, the 13th-century mother church to the Church of Sweden, where monarchs are crowned (9am-4pm; 40 SEK / £4), free to “those looking to take part in a service or to pray”. The elaborate royal pews count among the interior attractions, along with another statue of St George and the Dragon.

The best brunch in town is at the American Table buffet in the Clarion Sign (there are separate sittings on Sundays at noon and 2:30pm, 1-3pm Saturdays; 305 SEK / £30).

A network of harbour ferries provides superb views at bargain fares. Most of them start or end at the Slussen terminal. From here you can pick up a boat to Djurgården – a more successful trip than the pride of the Swedish fleet, the warship Vasa, made on her maiden voyage.

The ship’s remains are housed in the Vasa Museum, which reopened recently after refurbishment (10am-5pm daily, Wednesday to 8pm; 130 SEK / £13). It tells you of how, on 10th August 1628 the Vasa set sail but sank after only fifteen minutes. For the next 333 years she lay in the harbour mud until she was resurrected and restored.

A walk in the park

Close by is the main entrance to Skansen, a Scandinavian theme park aimed at rescuing Sweden’s heritage from the march of progress; open daily at 10am; closing times vary seasonally (110 SEK / £11).

Like Alfred Nobel, Artur Hazelius was wealthy, enlightened and altruistic. In 1891, as Sweden raced towards an industrial future, he decided to preserve the traditional way of life and dozens of buildings from across the country have been relocated here. Costumed guides reveal how simple, and tough, Nordic life was.

Icing on the cake

There was something in the air that night in Brighton in 1974, when the four unknowns won the Eurovision Song Contest. ABBA went on to dominate the charts for a decade. The museum reveals how Agnetha, Björn, Benny and Friday formed and later fell apart. “Walk in and dance out,” says the publicity. “It feels like we’ve come home,” says Björn.

SIMON CALDER is a travel journalist at The Independent.