Norway’s unlikely role in the Middle East has been revealed in a surprise hit play, Oslo, running at the National. BRYAN APPLEYARD went to see it…

Norway and the Middle East have one big thing in common: oil. In all other respects, Norway is the opposite of the Middle East: peaceful, democratic tolerant, reasonable, rich (in a good way) and cold.

For a few brief, shining months in 1992 and 1993, however, they had one other big thing in common: peace. Or, at least, the hope of peace. It was then that, in secret, Norwegians engineered and agreement between the Israelis and the Palestinians. The deal was known as the Oslo Accord, and in September that year it was celebrated with the outstanding spectacle of Yitzhak Rabin, the Israeli prime minister, and Yasser Arafat, chairman of the PLO, shaking hands in Washington DC, both enclosed by the arms of Bill Clinton.

None of which would be of the slightest interest to your average theatregoer were it not for the fact that, a few years ago at a school in New York, the daughter of a theatre director, Bartlett B. Sher, befriended the daughter of Norwegian diplomats. They were Mona Juul, then diplomat to the UN and now to the UK, and Terje Rod Larsen, president of the International Peace Institute. These two had quite a tale to tell, and they told it to Sher, who contacted his pal, the playwright J.T. Rogers.

Juul and Rod Larsen were the creators and managers of secret “back channel” meetings between Palestinians and Israelis in Oslo. They had a theory, or, rather, they had common sense. They thought that close human contact rather than distant diplomatic manoeuvres was the way to solve the world’s most intractable problems. The Oslo meetings were a test bed for the idea. It was also an intensely theatrical occasion: strangers and enemies meeting face to face for the first time; the mounting tensions of time and events, secrets kept and exposed, power and personality.

Rogers had form when it came to creating plays out of current events. Notably, there was Blood and Gifts, about the conflict in Afghanistan in the 1980s. Sher invided Rod Larsen to talk during the New York run of the play.

“Terje came to speak,” Sher says. “Nobody really knows more about the Middle East and Central Asia than he does. He was absolutely incredible- he’s a fantastic storyteller.”

“I talked to him,” Rogers says, “and I started to learn about the bare bones of the back channel, which I didn’t know about. Even the bare bones of that- my God, I was immediately jump-cutting to what you could do with it in the theatrical sense. I had been looking for a way to write a play about the Middle East. How do you do that? There were such inflamed passions about this – people weren’t going to listen. But discovering this meant there was a back channel for me to get into the subject matter.” “I had been looking for a way to write a play about the Middle East. How do you do that? There were such inflamed passions about this – people weren’t going to listen.”

His play, Oslo, is the result. Its run at the Lincoln Center in New York attracted rave reviews. I saw it there. It will have an extended autumn run in the West End, but will open here at the National Theatre, where I met Rogers and Sher. They are like two versions of one man: Rogers all trilby hat and New York style, Sher with the looser air and the one who has to get things done. But what they want is similar, as are their voices, so I had trouble disentangling them on the recording.

There’s one problem with the National show. The New York production was at the Vivian Beaumont Theater, which has a superb thrust stage. At the National, the venue will be the Lyttleton, which does not- it’s more or less conventional proscenium arch. The thrust was intrinsic to the show I saw: the audience was in the same room as the protagonists and, as a result, we too felt like players in this great and terrible game.

“The thrust is difficult to work in,” Rogers says, “but also it’s the best because of the speed with which you can move things. So I wrote it specifically for a thrust.”

Never mind, I’m sure Sher will fix it. For him, the intimate engagement of the audience is a statement about the role of theatre today. “I think, particularly in the twenty first century, in a universe where so much is accessible to people in so many ways – through phones- through all kinds of technology – that, at a heightened level, the theatre being a public space to exchange ideas and to wrestle with historical and maybe even personal problems has become more and more important. I’m finding with this play- against all the normal rules of ‘entertainment’- how much thirst there is in the audience for that level of ideas and engagement.”

Is public engagement with current affairs something theatre can do better than any other medium? These guys think so, especially now. Our conversation had begun, inevitably, with five minutes of gnashing of teeth about Donald Trump. “He’s not even a businessman,” Sher says. “He’s had no one to answer to except his rather and his wife (whoever she may be at the time).”

Rogers points out that the New York run straddled the period in which Brexit and Trump’s ascent to power seemed to turn the world upside down. Audience reactions were transformed. The play ends- bit of a spoiler here – with a speech by Rod Larsen, delivered  from the auditorium. It’s a secular prayer for peace.

“The character Terje demanded to have his say at the end of the play,” Rogers says. “That speech, without any change in the script, was transformed by Brexit and Trump. Before that, people just went around discussing the issues; but, after, it became incredibly emotional for the audience. It got standing ovations. I can’t take credit for it – the speech wasn’t intended to be a clarion call to arms.” 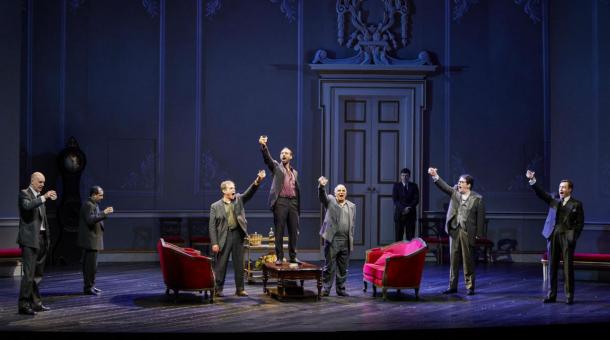 “It got standing ovations. I can’t take credit for it – the speech wasn’t intended to be a clarion call to arms.”

Rogers didn’t intend to provoke this reaction because he didn’t want the play to have a neat message other than “It’s complicated”.

“I take issue with the moment we are living in, where the default – so obvious we don’t talk about it- position is, more and more of everything is better. The thing about a play is that we are agreeing to sit and ruminate about something and not have to have an answer.

“I do think about what’s great about the theatre – and doing this play has been a great affirmation of this- is that we get to be ambiguous. I’m exhausted by all political discussions being about ‘This is right and that is wrong’. I’m on the left and I can’t watch MSNBC and I can’t read editorials in The Guardian because we’re all yelling in lockstep, and it feels diminishing.”

In other words, the best political art is not political in the sense of expressing an opinion, but in the sense of being about politics as a process – unending and usually inconclusive. Both Sher and Rogers point to Shakespeare as the supreme exemplar of this view: he wrote about politics, but no honest person can claim to have the faintest idea what his own political views were. Again, this is crucial to the very idea of theatre.

“I want to be entertained,” Rogers says, “but I want ideas coming at me that I can think about and wrestle with. There are things theatre does to that you can’t do in a newspaper article. A journalist’s sacred rule is to find the truth, tell you the facts – and that’s not our job. Our job is to ask more complicated questions, not to tell you the answer.”

Sher, as ever, is on the same page. “Audiences saturated by MSNBC and Fox News are getting all the information pushed at them with a bias, trying to control or manipulate them. This kind of play can give intelligent people the opportunity to wrestle with contradictions and have an experience of change or an ability to actually learn something.”

To stay on this tightrope of passionate neutrality, however, is hard. Soon after seeing Oslo I saw Stephen Brown’s Occupational Hazards, based on the memoir of Rory Stewart about his time in Iraq. It’s very similar in intent to Oslo, but felt restricted in scope. There wasn’t so much an argument in my head afterwards, as a shrug.

Also, it didn’t really do what Oslo does triumphantly: make you understand why people think the way they do, even if you believe they’re crazy or just plain wrong. Oslo keeps you feeling neutral, but passionately so.

Curiously, when it comes to political theatre, there is a transatlantic division. Rogers recons 97 per cent of new American plays are “private”, engaging with the small and intimate; the reverse is true in Britain. “It’s a generalisation, but new plays in the USA are inward-looking. Both modes can make tremendous theatre, but I’m more partial as a theatregoer to the first.”

As for the real world, the Middle East continues to be, apart from oil, the opposite of Norway. History has played its usual role as the Fool, the supreme and tragic mocker of every plot and plan. During and after three rounds of talks in Oslo and the triumphant hand-shake in the presence of Bill Clinton, life on the ground continued as usual. Rabin had to close the border with Gaza after Israelis were stabbed by a Palestinian, and Israel launched a week-long bombardment of Lebanon. In 1994, an Israeli settler killed thirty Palestinians and the PLO suspended participation in the Oslo Accords.

Also in 1994, Arafat, Shimon Peres and Rabin were awarded the Nobel Peace Prize. In 1995, Rabin was assassinated by an Israeli extremist. In 2000, the Second Intifada began. Arafat died in 2004. Peace lay- and still does- in ruins, but, if art has any say in the matter, not quite.

BRYAN APPLEYARD is a theatre critic for The Times.