With Mankell and Larsson gone, JO NESBØ is the unchallenged king of Scandi noir. He’s pursued a career in football and music, and his eleven Harry Hole detective novels have all been sellouts. Now he’s published a twelfth: Macbeth; Shakespeare’s play being inspiration, as ROBBIE MILLEN finds out, for Harry Hole all along…

Jo Nesbø is a shapeshifter. In his fifty eight years he has been a professional footballer, a financier and a rock star. He certainly looks like a dad-rock veteran. When I met him this week in drear, sunless London, he was wearing naff Bono-style yellow-tinted wraparound glasses. But don’t let that put you off because his latest incarnation is as a crime writer — thirty million-plus novels sold — and Nesbø is very good at murder. His Harry Hole novels rightly have a very strong following and now, with Henning Mankell and Stieg Larsson gone, he is the leading purveyor of Scandi noir.

For his latest trick the Norwegian author has had a go at rewriting Shakespeare. His new novel, Macbeth, is his interpretation of the Scottish play, published as part of the very patchy Hogarth series of Shakespearean plays reimagined by modern authors. The bloody tale of a nobleman who murders his way to the tyrannical top is natural territory for Nesbø: “Macbeth has been lurking in the back of my mind for many years,” Nesbø says. Hole, his famous detective character — alcoholic, unpredictable, insurbordinate, awkward and ethically dubious — “is sort of inspired by Macbeth. That character pushes the envelope of sympathy . . . and he [challenges the reader to ask] can you be morally in bed with him?”

Obviously Norway is Ibsen land, but Norwegian kids grow up with Shakespeare. Nesbø says as a teenager he was “hugely impressed” by Roman Polanski’s 1971 film of Macbeth. After seeing it, he bought a copy of the play in English. “I read two pages and understood one sentence — and I thought I was good at English!” As he confesses, he “wasn’t so much into Shakespeare, but Macbeth”. 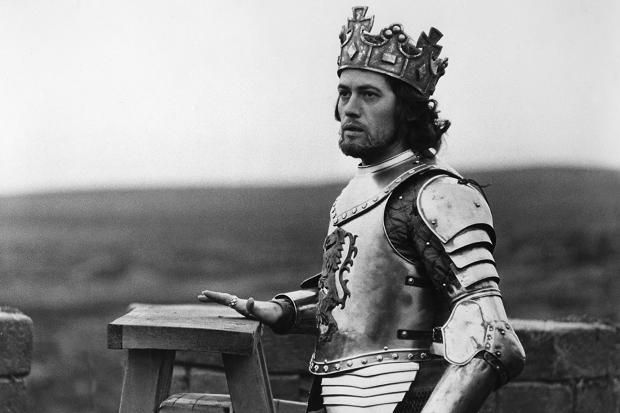 Nesbø — soft spoken and with a feel of good-natured Scandi-sincerity — says that it is of “no interest to me or my readers to try and be Shakespeare. So the first thing I had to do was throw overboard all the prose and poetry of Shakespeare.” He has turned it into a crime novel in which Macbeth is an ambitious copper who kills to become and to stay chief of police. He has some fun with it; rather than witches’ brew, gangsters fight over a drug called “brew”. It is set in the 1970s in a Scottish “unnamed city that could be nowhere and everywhere”: one-part Seventies New York, one-part rainy Bergen, but most of all the Newcastle of Get Carter. “I visited Newcastle in my early teens, my parents took me as there was a ferry between Bergen and Newcastle.” The Seventies were grim for Norwegian holidaymakers.

A theme in his Macbeth is the choices that characters have to make in a murky world. Do they follow Macbeth as he demands of them ever bloodier, more wicked deeds? Moral choice is perhaps starker and darker in Nesbø’s imagination because of his family history. His parents both faced a dilemma when Norway was occupied by Germany in 1940. His family on his mother’s side were in the anti-Nazi resistance, publishing underground newspapers. His mother, “just an innocent girl”, ran errands for them. His father, however, volunteered aged nineteen to fight for the Germans. He served in the Norwegian Waffen-SS during the siege of Leningrad, before being injured by a hand grenade. His family were militantly anti-communist and worried about the Soviet menace over the border (a similar menace inspired Occupied, a series available to British viewers on Netflix that Nesbø dreamt up about Russia invading Norway to seize its oil). “His view of Europe at the time [in 1940] was that the old democracies, like England and France, were on the verge of bankruptcy. Strong countries were the future — the USA was on the other side of the world and wanted nothing to do with Europe. So in Europe, you had to make a choice between Hitler and Stalin. Simple as that. He chose Germany.”

After the war, his father, who later became the chief executive of a transport company, was jailed with 20,000 other Norwegians for collaborating with the Nazis. “He would make no excuses and was a reflective man. He felt that it was the right punishment for making the wrong choice.” Nesbø wrote of his father’s experiences in his 2000 novel The Redbreast (Rødstrupe), which in 2006 became his first novel to be translated into English. “90 per cent of scenes in the trenches are my father’s stories. He told me, ‘Those big movie war scenes where the battlefield looks like New Year’s Eve — with lights and explosions and people crying out. Well, it was exactly like that.’ ”  He says those conversations with his father “were a starting point or a viewpoint from which to write”. Life, morally speaking, is mostly shades of grey in Nesbø-land. He aims in his fiction “to describe things from different people’s viewpoints, whether it is the victim or the killer. In the Harry Hole books, most characters fail morally.”

Nesbo’s first novel, The Bat (Flaggermusmannen), was not published until 1997, when he was in his late thirties. I suspect his previous lives have enriched his imagination, much more so than if he had set off to be a writer in his teens.

“Football — that was the thing that I was confident about,” he says of playing for his home town of Molde in the Norwegian equivalent of the Premier League. “I didn’t study that hard and thought it was going to be my job. Then I tore the ligaments in my knees and my career was over by the age of nineteen. I had to come up with a plan B, so I did what you do when you don’t know what to do. I studied economics.”

“Soccer — that was the thing that I was confident about. I didn’t study that hard and thought it was going to be my job. Then I tore the ligaments in my knees and my career was over by the age of nineteen. I had to come up with a plan B, so I did what you do when you don’t know what to do. I studied economics.”

That led to a decade-long financial career that gradually morphed into a rock career. He would rush from the office to nighttime gigs. His band, Di Derre, reached No. 1 in the Norwegian charts in the mid 90s, and he still plays the guitar and sings. Music had always been a sideline — as a teenager he wrote lyrics for friends in bands — “I was the Bernie Taupin of my little town,” he says mockingly, comparing himself to Elton John’s long-time lyricist; he has a nice line in wry humour. “I would write in Norwegian and English. I had this Oxford English Dictionary where I would look up and find really long words and put them into the lyrics — nobody knew what they meant, but everyone would say, ‘This is a very intelligent young man.’ ”

His first book came about by chance. A publisher asked him to write a book about a pop star’s life on the road. He thought this would be boring so he wrote a crime thriller instead. Why wouldn’t he? “My friends were all writing novels. They were quite pompous and pretentious — they were going to write the Big European Novel. I admired their confidence, but I didn’t admire their writing.” He jokes that “we wanted to be Knut Hamsun [the Norwegian Nobel laureate] or Dostoevsky; we would suck in our cheeks to look like hungry and starving artists”. Well, he is lean — his hobby is rockclimbing — rather than underfed. There is something of the semi-housetrained alpha dog about him (he is unmarried and has a teenage daughter) and you suspect he has learnt to curb his instincts to fit into the herbivorous world of crime writers. As a breed, despite their bloody imaginations, they tend to be unedgily nice, especially when compared to the egomaniacs of literary fiction.

“There is something of the semi-housetrained alpha dog about him (he is unmarried and has a teenage daughter) and you suspect he has learnt to curb his instincts to fit into the herbivorous world of crime writers. As a breed, despite their bloody imaginations, they tend to be unedgily nice, especially when compared to the egomaniacs of literary fiction.”

“I come from soccer and music, where we are very competitive, but crime writers are all friends. It is such a nice, soft atmosphere; everyone helps each other. I am this competitive fighter; it took me a while to let down my guard.” He is a bit of a softie, because Norway’s other famous writer, Karl Ove Knausgaard, the author of the autobiographical My Struggle (Min kamp) sequence of novels, is attempting to write a crime novel; Nesbø is going to be a consultant, guiding Knausgaard into this murky world.

It’s telling that Knausgaard, a more literary figure, is turning to crime. There is prestige to the genre in Scandinavia, which perhaps explains why there are so many front-rank Scandi crime writers. “The Scandinavian [crime] tradition is centred on using the crime novel as a vehicle for telling stories about society,” Nesbø says. That tradition was established in the 1970s by the leftie Swedes Maj Sjöwall and Per Wahlöö, who used the genre to make serious political points.

With eleven Harry Hole novels under his belt, as well as children’s books, Doctor Proctor’s Fart Powder (Doktor Proktors prompepulver), Nesbø has undoubtedly enriched that tradition. Although Macbeth is a valiant attempt, I’d direct new readers to his previous novels, The Thirst (Tørst), a superb twisting page-turner, or The Snowman (Snømannen) (just ignore the 2017 film of it starring Michael Fassbender). His Macbeth has followed the advice of the apparition — “Be bloody, bold, and resolute.”

JO NESBØ is a bestselling Norwegian writer. His latest book, Macbeth, is out now, published by Hogarth Shakespeare.

ROBBIE MILLEN is Literary Editor for The Times.