After months of darkness, SARAH MARSHALL thinks the never ending summer light is what makes Scandinavians the happiest people on Earth…

Scenes of sandcastles washed with a warm, eternal glow typically belong to vintage Super 8 camera rolls or nostalgic childhood memories. Yet it is possible to travel beyond the bounds of imagination to places where those rose-tinted dreams are very much an annual reality.

Praised by artists and writers, Scandinavian summer light is special. From the end of May until August, darkness barely falls, and, high above the Arctic Circle, the sun never disappears. It bounces gently on the horizon and dusk segues into dawn, painting the sky with apricot streaks and tangerine swirls.

In this midnight sun period, thousands of islands, islets and skerries become playgrounds, full of opportunities for spontaneous adventure and switch-off relaxation – the essence of friluftsliv (open-air life), a Scandinavian philosophy for connecting with nature.

In Norway and Sweden, this is backed by the “right to roam”, an ancient law granting the freedom to camp and hike anywhere regardless of land ownership if no disturbance or destruction is caused.

Combine this with hygge, a convivial atmosphere where treasured moments are shared with good people, and all the elements for a perfect summer holiday are in place.

Given their abundance, it’s surprisingly hard to buy an island, but polar explorer Borge Ousland seized his chance eight years ago.

Borge, fifty five, has climbed 26,000 ft mountains, survived life-draining temperatures of -40C and was the first person to ski solo to both poles. But arguably his greatest conquest is a fifty five-acre granite mound in the Grotoya strait, one of 3,000 islands in northern Norway’s Steigen archipelago.

The hot tub has already been fired when I arrive at Manshausen, after a 90-minute ferry journey from Bodo, gliding along a fractured coastline where stooping stone giants bare their knuckles in the sea.

Green lights from the sauna shimmer in a seawater plunge pool, and although I’m too late for the aurora, the sunset display is equally impressive. Made of larch, spruce and glass, four cabins perch on the island, with three more planned for completion in June.

Reached by a staircase of pink granite boulders, my minimalist, futuristic cube floats above the water, cradled by a view of the immense Skotstind mountain, rising from the shore like a Hokusai wave.

It’s not yet midsummer so I leave my blinds up, allowing a ghostly red glow to float through the glass walls. Hours later I’m stirred by a sunburst striking the masts of a vintage fishing vessel for the gentlest of wake-up calls.

“I’ve always liked this area,” Borge tells me, recalling childhood holidays of cod fishing with his brother. “It had a big impression on me as a place where mountains connect with the sea.”

Soon after buying the land, he decided to share “this special place” with others and set about creating “a feeling of being outside while inside” with the help of architect Snorre Stinessen. Now he visits only twice a month, leaving daily management to skyscraping Dane Jasper and his girlfriend Astrid.

As well as admiring nature, Manshausen Sea Cabins encourages guests to physically engage with their environment through activities such as kayaking, snorkelling, fishing, hiking and rock climbing.

A five-minute boat ride away on the mainland, Nordskot has suitable walls for climbing and rappelling, including a 150ft inward-sloping descent requiring a literal leap of faith.

Wrapped in a spongy tundra of lime green lichens and ochre moss, a non-taxing trail leads to a bird’s-eye view of Manshausen and the Lofoten Wall, a sixty two-mile jaw of splintered teeth biting at the horizon. 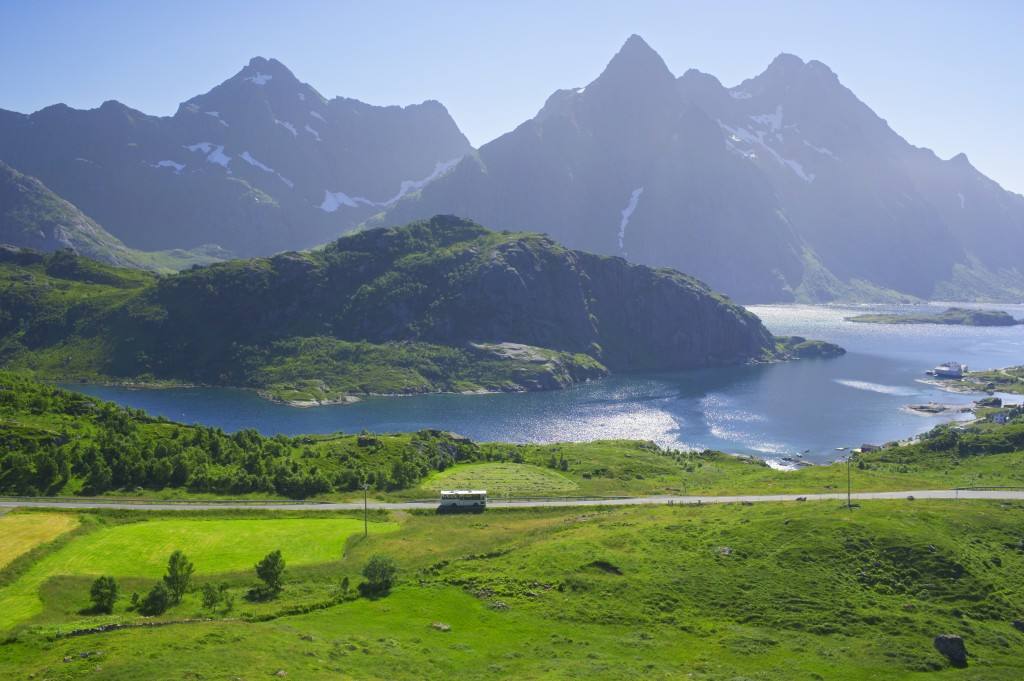 Beams of sunlight light up the sandy seabed to create a jewel box of turquoise pools, where starfish redder than rubies glint like lost treasures. It’s like a scene from the Indian Ocean, and although air temperatures here are of course far lower, Jasper promises that the mercury can sometimes soar to 29C.

Past and present, this is one of the richest areas in Norway. Along with neighbouring Naustholmen and Grotøya, Manshausen formed a wealthy trading post from the late 1600s to the early 20th century. It was once possible to hop across boats all the way to the mainland when fishermen sought ­shelter in the Vestfjorden.

Astrid, who runs the Manshausen kitchen, hopes to work with him soon. She aims to make the menu as local as possible: sweet Arctic carrot jam is made in Valnesfjord, soft cheese hails from Kjerringoy, and firm coils of cured salmon come from one of 12 salmon farms in the world with a certification for sustainability.

But the shopping is not easy. “Less than three per cent of land in Norway is set aside for agricultural use,” she complains, “even though the soil could produce much more. It took me six months to find someone locally selling eggs!”

Astrid’s plans to start a vegetable patch and build a chicken coop complement Borge’s grander designs for making Manshausen sustainable, with the intention to harness energy using a windmill. An expert in survival, he’s adept at utilising available resources.

“In the old days people were able to survive on these islands and make their living out of it. I want to take back a bit of that idea, creating a world in itself.”

Borge’s interest in art and aesthetics has shaped the island. In the main house, renovated from a 19th century building, a statue of Roald Amundsen is joined by a spiralling narwhal tooth from Greenland and a vinyl pressing of Pablo Neruda’s Canto General.

A curio cabinet reads like the professional adventurer’s autobiography; a curved tip is all that remains of a broken ski used in place of ice screws to climb down a cliff in Patagonia, and a coil of 20,000-year old mammoth hair in a tin turns out to be a gift acquired in Siberia en route to the North Pole.

This area is clearly a magnet for explorers. Borge’s neighbour is Randi Skaug, the first Norwegian woman to climb Everest. I row over to her Tentsile Tree Camping site on Naustholmen, where she lives most of the year with her fluffy cat, Grey Man.

“I spent three summers kayaking along northern Norway’s coast,” Randi recalls wistfully, recounting the start of her love affair with the region. “I counted my journey in golden moments rather than kilometres, and I had a thousand of those.”

Inspired, I borrow a kayak to paddle through a labyrinth of rocky outcrops, fringed with swaying kelp fronds and mounds of blood-orange seaweed.

Slicing through glassy water as sea eagles scream overhead, I’m struck by the infinite possibilities; with so many daylight hours, the opportunities for adventure are endless, and every Scandinavian island has its own special story to tell.

SARAH MARSHALL is a travel writer for The Telegraph.