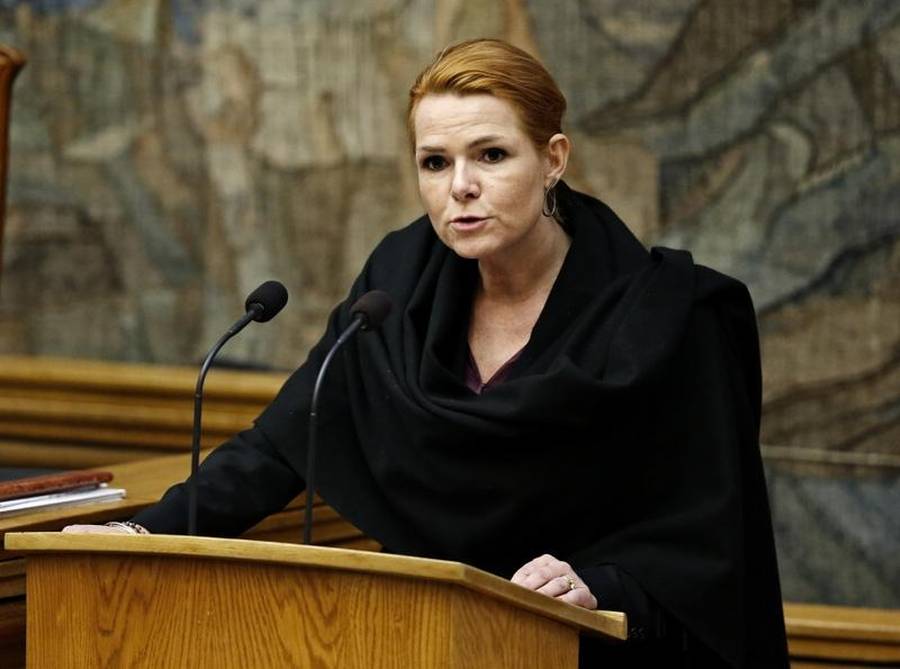 Fearful of violent gangs, Denmark’s minister for Immigration, Integration and Housing is getting tough on new arrivals, as ANDREW BYRNE finds out…

Inger Stojberg, 45, who as Denmark’s immigration minister enjoys being the iron lady of non-fictional Danish politics, won applause last week for ratcheting up the odds against migrants.

The former journalist — who wrote in a newspaper article in April that “a significant proportion” of immigrants “cheat, lie and abuse our trust” — announced proposals to tighten citizenship rules in an attempt to quell a surge in immigrant gang crime that has shattered Danes’ sense of security.

Denmark is ranked as the third happiest country in the world and has long enjoyed a reputation for a generous welfare system, a high quality of life and a commitment to egalitarianism — all summed up as hygge or contentment.

In reality however, Danes feel under threat from immigration and have worked hard to discourage it.

Unlike neighbouring Sweden, which welcomed 160,000 asylum seekers during the 2015 European migration crisis — the highest proportion of any EU country — Denmark has slashed refugee benefits and put advertisements in Turkish and Lebanese newspapers warning of grim conditions for asylum seekers. Only 3,000 were granted asylum in the country last year.

Denmark’s mainstream parties have shifted firmly to the right, led by the populist anti-immigrant Dansk Folkeparti — which became a trend- setter for radical right-wing parties across Europe in the 1990s and emerged as the second strongest party in elections in 2015.

The rules for obtaining Danish citizenship are already tight, with tough tests for language skills, knowledge and background checks. Research by Politiken newspaper last week found that only 21 per cent of successful applicants for citizenship last year had come from primarily Muslim countries. In 2014 it was 70 per cent.

“Research by Politiken newspaper last week found that only 21 per cent of successful applicants for citizenship last year had come from primarily Muslim countries. In 2014 it was 70 per cent”

Politicians, cheered by their record in rebalancing the pool of new citizens towards white Christians, are taking an even tougher stance on a basic question: who deserves to be Danish?

“To me, if you’re born and raised in Denmark then you’re a Dane,” said Yildiz Akdogan, a Turkish-born politician who in 2007 became one of the first two women from immigrant backgrounds to be elected MPs. But the new rules reject that simple formula. Some fear they will deepen the country’s racial divisions.

A surge in immigrant gang crime, which has increased voters’ sense of vulnerability, lies behind the proposed new laws. Last year lethal gun attacks spilt onto the cobbled streets of Nørrebro, a gentrifying multi-ethnic neighbourhood in Copenhagen.

At least one person was killed and more than twenty were injured in gang violence. In one incident a 28-year-old Swedish woman was injured when she was hit by a stray bullet as she cycled along a busy road.

The level of violence is far lower than across the Øresund Bridge — itself an icon of Scandi noir drama — linking Copenhagen to the Swedish city of Malmö, which is struggling with heavily armed criminal groups. But the attacks have unsettled Danes who had little experience of violent crime, said Kim Møller, a criminologist at Aalborg University.

“From a Danish perspective this is quite serious — we’ve never seen anything like this before: civilians getting shot in the street,” said Møller.

Since becoming immigration and integration minister when the centre-right Venstre party won power in 2015, Støjberg has courted controversy by breaking taboos and delivering a constant stream of bite-sized policies targeting migrants. In 2016 she made refugees hand over their valuables at the border to help pay for the costs of hosting them.

Under these rules, which the United Nations said would “fuel fear and xenophobia”, refugees can keep up to 10,000 DKK (nearly £1,200) in cash and valuables, but items of value above that may be confiscated.

Støjberg drew criticism in 2016 for falsely claiming that a kindergarten had banned pork from school meals in deference to multiculturalism. No such ban existed. She also had to backtrack on a directive forcing refugee couples, including those with children, to live apart.

Last November she made headlines again when bodyguards hurried her out of a deportation centre for failed asylum seekers after inmates mobbed her.

Unfazed, she celebrated her “50th restriction on immigration” in March with a Facebook post that showed her smiling and holding a cake, layered with fruit, a Danish flag and the number fifty.

Now Støjberg is turning her sights on the new generation of street gangs, which recruit their members largely from immigrant communities. Under current rules, immigrants who commit serious crimes must maintain a clean record for several years before applying to become Danish citizens. The new proposals, presented to political parties on Wednesday, would bar them from citizenship for life.

“For me, it is a point of principle: you do not reward people with Danish citizenship if they commit gang crimes,” Støjberg said. Almost all the leading parties back her proposals. One left wing opposition MP said they did not go far enough.

Supporters say the lifetime ban will discourage criminal activity. Critics counter that it will push young immigrants further to the margins. Young men who commit even minor offences — such as making verbal threats — could end up relegated to a permanent underclass, breeding resentment.

“Some young people may turn even further against Danish society because they will feel like second-class citizens,” said Mette Grith Stage, a criminal defence lawyer. “I understand the principle of imposing a waiting period after someone commits a crime. But excluding gang members from Danish citizenship for life will mean they are less motivated to exit that world.”

Others note that denying gang members citizenship will not make it any easier to deport them. Danish courts have repeatedly rejected requests by prosecutors to deport Shuaib “Shabbi” Khan, a Pakistani citizen and prominent member of Copenhagen’s infamous ‘Loyal To Familia’ gang, despite his convictions for violent crime.

Supporters of the new rules say they will satisfy a public hunger for action as ordinary Danes fear the loss of their Scandinavian idyll.

“As the gangland crime problem has escalated over the past 10 years, more politicians have come to feel the time for generosity is over,” said Møller.

“Having a very lenient criminal justice system and then seeing shootings in the streets — you can see why some people have lost patience.”

ANDREW BYRNE reports for The Times