Swedish chef NIKLAS EKSTEDT celebrates Nordic cuisine with his restaurant and television persona. But, as he tells MICHAEL ODELL, his real passion is simple dishes that heal the body and mind…

You may remember Niklas Ekstedt’s appearance on the BBC’s Classic Mary Berry this year. The chefs’ sexual chemistry was widely noted, with Berry purring cougar-like as Ekstedt whipped up Swedish doughnuts. Yet, initially at least, the thirty nine-year-old thinks Berry was a little wary of him.

“I’d never seen her or The Great British Bake Off,” he says, “but my English friends told me, ‘Oh you must go. Mary is the Queen of England.’ When I got to her house I think she was a little suspicious I’d come from a casting agency. It was only when I began cooking that she showed interest.”

Ekstedt is being a little coy. Their flirting made national news. When Ekstedt knelt down in front of her to build a fire, the eighty three-year-old said: “It’s a long time since I’ve had a man on his knees in front of me.”

For a Norseman, he says, it is sometimes a challenge to interpret what he calls “the ironic English humour”. “When Mary said she likes some sauce with her meatballs, as a Swede I have to think, ‘What does she really mean by this?’ But in the end we enjoyed a beautiful day in her house drinking champagne and laughing together. If it came across like we were having a relationship, those feelings were real.”

The whole episode was a return to the limelight for Ekstedt. Ten years ago he was a culinary wunderkind who became a TV star in Sweden. “They needed a Swedish Jamie Oliver and they chose me,” he says with a shrug, sweeping a floppy fringe from his face. “I sold books, I smiled for the camera, but it’s not me.” As he contemplates the cost of stardom, a plate of scallops arrives. “I wanted to get back to this,” he says, looking at them. “This simple, beautiful food.”

“I sold books, I smiled for the camera, but it wasn’t me. I wanted to get back to this simple, beautiful food”

We are sitting in the Roth Bar & Grill in Bruton, Somerset, part of the Hauser & Wirth gallery, a mecca for aesthetes, walkers and foodies in the southwest. Tonight Ekstedt is guest chef here and, outside, two local lambs have been spread-eagled over drums filled with embers, like recipients of terrible medieval justice. Along with the “flavours of meadows, forest and lamb”, on the menu tonight will be “hay-flamed salmon” and “birch-infused fudge”. Make no mistake, this is not back-garden barbecuing.

Ekstedt’s nascent talents were first noticed when he was a fifteen-year-old school boy doing home economics. He was just eighteen when his parents put him on a flight to Chicago to train at the world-renowned restaurant Charlie Trotter’s. “It was then serving the best food in the world,” says Ekstedt. “And the motivation was to become the best oneself.”

He worked long, arduous hours, sharing accommodation with an eighty-year-old Swedish woman who said he could stay in her apartment for nothing if he washed her hair once a week. “Disgusting, but I did it,” he says.

After 18 months in America he was summoned to the acclaimed El Bulli in Spain to hone his craft. “El Bulli was horrible. So tough. My job was cutting beans to exactly eleven milimetre lengths. These in turn became just a minor part of very elaborate culinary structures.”

Aged twenty one Ekstedt returned home and opened his first self-named restaurant in Helsingborg, southern Sweden. He specialised in elaborate stunt gastronomy. Swedish TV soon came calling. Ekstedt’s show, Niklas Mat (Niklas Food), was an immediate national hit. The problem was, he says with a sigh: “I was turning into something I didn’t want to be.”

It was an invitation to appear on Sweden’s version of Strictly Come Dancing that pushed him over the edge.“The foxtrot? I could not be doing this,” he says. “No way.” Ekstedt not only turned down the show, but he cancelled his TV programme and sold his restaurant. With money they had saved, he and his wife, Katarina, bought a wood cabin on the island of Ingaro in the Stockholm archipelago and had their first son, Vinston.

“My wife got a new job and so I took paternity leave to raise our boy. It was tough. I’d abandoned my career while all my peers were getting very successful. René Redzepi, who I’d known since I was seventeen, was running the best restaurant in the world [Noma in Copenhagen] and Heston was making a name for himself [Blumenthal had become a friend while cooking at Ekstedt]. I had a bit of a crisis.” 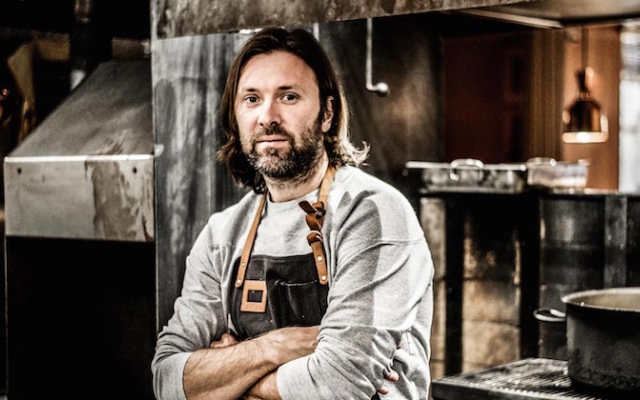 “It was tough. I’d abandoned my career while all my peers were getting very successful. René Redzepi was running the best restaurant in the world and Heston was making a name for himself. I had a bit of a crisis.”

Not only did Ekstedt not have a career, he didn’t have a kitchen either. He did, however, have an axe. While the cabin was being built he resorted to cooking outside on a fire, an experience that recalled his youth in the forests of Jämtland, northern Sweden, where he grew up. His father was an accomplished whitewater canoeist who loved the outdoors. He would often chop wood and cook on an open fire. Elk stew and sautéed reindeer were specialities.

“It’s an incredibly satisfying experience to hunt and forage your food. We ate meat flavoured by birchwood smoke supplemented with loganberries and blueberries. I wondered: perhaps we have lost something from that primal way of cooking. There is a Spanish fine-dining restaurant I will not name where the starter consists of the chef coming out and spraying the room with a scent. This is a hologram of cooking and I wanted to get as far from that as possible.”

I cannot help wondering if it was simply the drudgery of childcare that drove Ekstedt back to the fire pit. “I suppose you could see it in terms of a man reasserting himself after a period of paternity leave, but it’s more than that. I was trained to compete, compete, compete. This is about slow cooking, lost traditions and being in the moment.”

Ekstedt began creating what he calls an “analogue kitchen”, limiting himself to cooking on an open flame or in a wood-fired oven using cast-iron pots. He was so single-minded in his efforts that when Katarina entered hospital with their second son, John, the doctors noticed that her iron levels were so high she didn’t need supplements. “I was pretty obsessed. Cast iron for everything. And always flame or wood smoke. She said the hospital food actually made a nice change.”

By 2012 Ekstedt’s ideas for a revival of traditional Nordic cooking had crystallised in a new restaurant — also called Ekstedt — in Stockholm. It has no electricity or gas and he cooks with, among other things, a “Stone Age microwave oven” (essentially a cast-iron box filled with embers). The fundamental principles of his culinary philosophy are set forth in his book Food from the Fire.

One lofty chapter entitled On Smoke explains how many Swedish families have a signature smoke. Another, On Wood, includes an instructive anecdote about how a man’s wood store is a window into his soul. A friend’s father wouldn’t buy a car from anyone who kept logs under a dirty tarpaulin because it denoted a lack of rigour. “You can go too far with the spiritual aspect,” Ekstedt says with a chuckle. “I must admit I don’t chop my own wood.”

Still, by exploiting every nuance of fire, smoke, ashes and soot, Ekstedt does produce food with miraculous flavour. His Stockholm restaurant, despite asserting the most primitive culinary values since Raquel Welch rustled up brunch in One Million Years BC, won a Michelin star in 2013. “I think fancy hologram cooking has peaked, so to win it for the traditional food of my homeland was very satisfying,” he says. “We Swedes and British are similar in that we always crave what is new. But sometimes there is a lot to be learnt from going back to traditions. The Romans and Vikings will have brought some tremendous cooking to Britain. I think someone needs to go back and rediscover them.”

Sweden, though, is still well forested and home to elk, wolves and bear. In the UK we simply don’t have the same tradition of roasting anything outdoors much larger than a chicken, let alone telling scary stories about trolls. “I know there is not the access to forests in the UK,” says Ekstedt, “but even if you bought steak from Sainsbury’s, rubbed them in hay and salt and cooked them over a griddle on a fire, then you would taste something extraordinary.”

Taste aside, Ekstedt believes his methods will change the quality of your life. His next book, Happy Food, to be published in the autumn, will explore the link between native cooking skills and wellbeing. He cites the example of the Japanese island of Okinawa, whose inhabitants used to enjoy some of the longest life spans in the world. When a US naval base introduced American food there, average life spans began to dwindle.

“The closer you live to the American base the earlier you die,” he says. “In Sweden those who eat natural and traditionally pickled or fermented foods live long lives.”

MICHAEL ODELL is a freelance journalist and author.