MIKE ATKINS travels along Denmark’s Skagen coast, home of the notorious ‘Skagen Group’ of painters, spending a night in Aalborg, a small town that, after a successful period of rejuvenation, is now home to some of the most satisfied people in Europe…

Are you happy with where you live? The people of Aalborg are. According to a recent survey, the residents of this small city in North Jutland are the most satisfied people in Europe. But why are they so smug? Could it be the cheap flights to Stansted and Gatwick? Maybe, but it’s more likely to have something to do with the zillion-krone makeover Aalborg has gone through, rather than the prospect of a weekend break in Stevenage or Crawley.

After a textbook period of post-industrial decline (“Once the cement capital of Scandinavia . . .”), Aalborg underwent an incredibly successful period of regeneration, with the Limfjord, the channel that cuts through the city, very much at the heart of this. The belching chimneys and clanging machinery that once lined the waterfront have gone, and in their place are concert halls, slick university buildings and fancy restaurants.

I spend an evening at one of those fancy restaurants, Fusion, dining on lamb sushi and langoustine purée. Outside, pleasure boats and seals bob about in the Limfjord as some wholesome-looking students rollerskate along the esplanade. It is like a city planner’s Powerpoint presentation come to life.

“I spend an evening at one of those fancy restaurants, Fusion, dining on lamb sushi and langoustine purée. Outside, pleasure boats and seals bob about in the Limfjord. It is like a city planner’s Powerpoint presentation come to life.”

Just east of the restaurant is the new Musikkens Hus, a fabulous jumble of concrete blocks and glass that houses a gorgeous concert hall and serves as headquarters for the city’s symphony orchestra. Slightly farther on is the last building to be completed by Jorn Utzon, the architect who designed the Sydney Opera House. Utzon famously left the Sydney project in a huff over funding and vowed never to return to Australia. However, he seemed quite happy to return to Aalborg, where he grew up, and the Utzon Centre, with its distinctive rooftops and role as a hub for architects and students, is his gift to the city.

Away from the waterfront there is little to set Aalborg apart from many other pleasant north European cities, but it has a certain charm. There are enough quirky independent shops and open-air cafés to occupy an afternoon’s wandering, as well as a couple of little gems worth seeking out.

Hjelmerstald, for example, is a pretty little street lined with beautifully preserved 17th-century cottages, and Jens Bang’s House is an elaborate four hundred-year-old mansion built in the Dutch Renaissance style. Bang was a wealthy merchant who had political aspirations, but was never accepted by the city’s political elite. His response to being shunned? Well, if you peek round the side of the house you’ll see a sculpture of Bang sticking his tongue out in the direction of the town hall.

Walking back to my hotel through Kildeparken, I am delighted to find a whole section of the park set aside for cherry trees planted by artists who have performed at a nearby concert venue. Next to each tree is a little music box that, at the press of a button, plays a medley of the artist’s hits. All the greats are here — Bob Dylan, Kiri Te Kanawa, Shakin’ Stevens — and, like a horrible child in an elevator, I gleefully press every button.

My thirst for highbrow culture suitably whetted (thanks, Shaky) I take a train two hours north to Skagen, a small town at the northernmost tip of the country. It was here in the late 19th century that an artist collective emerged, producing work inspired by the French Impressionists that is revered across Scandinavia, if less so beyond.

The Skagen Painters, who included PS Kroyer and Michael Ancher, were drawn by the dramatic, shifting sands and the distinctive light you get up here — just before dark there’s what is known as the ‘blue hour’, when the sea and sky seem to merge. And with most of the local population making their living from the sea, there was a good supply of burly fishermen and anxious housewives for subject matter, as the excellent Skagens Museum documents. 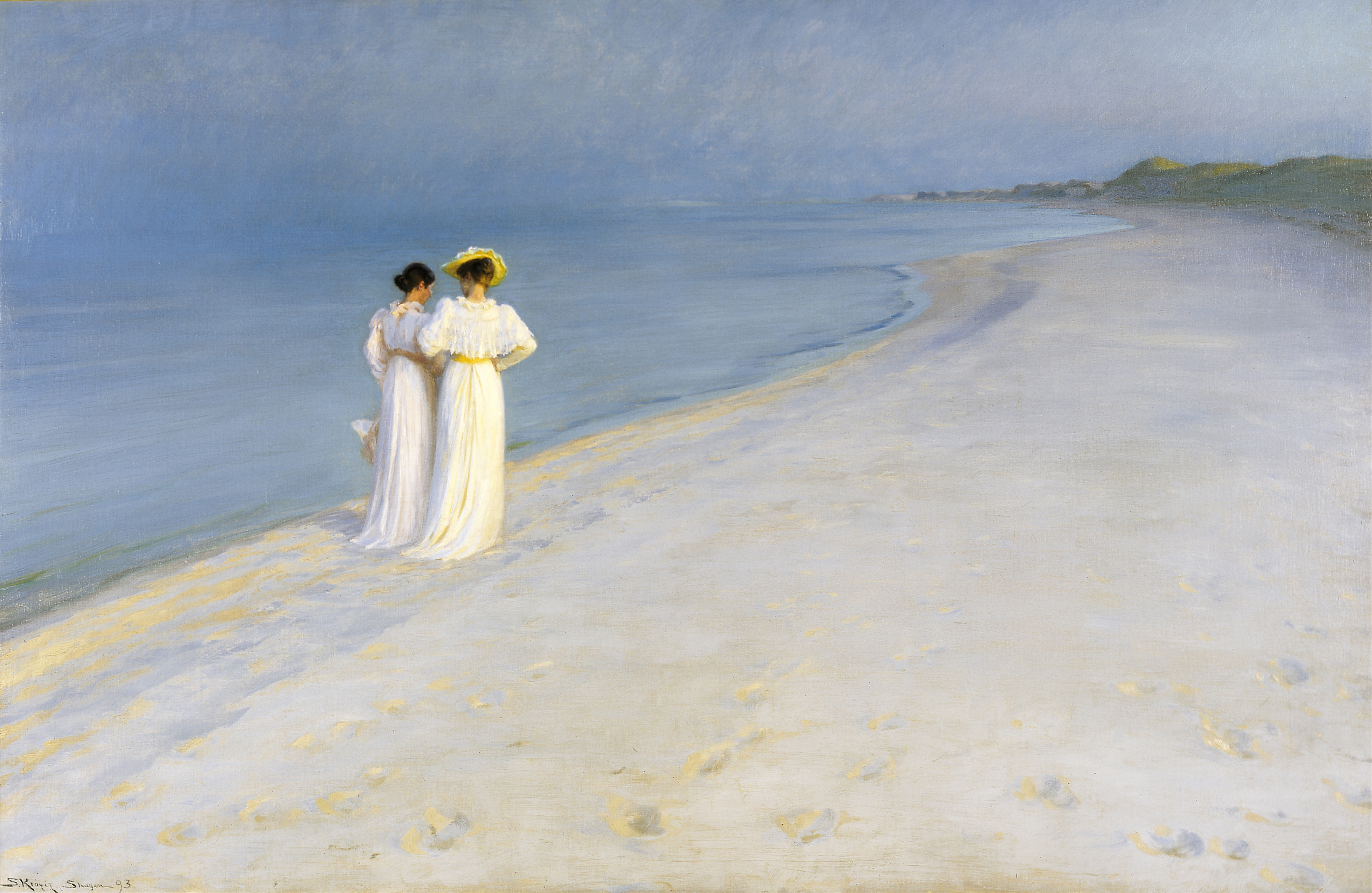 “The Skagen Painters were drawn by the dramatic, shifting sands and the distinctive light you get up here — just before dark there’s what is known as the ‘blue hour’, when the sea and sky seem to merge.”

The town has become something of an obsession for the Danes, who come to revel in the raw, windswept beauty of the beaches, browse the little shops in town and join the summer parties that pack out the beaches and restaurants.

The other reason they come is to see Grenen, a long, crooked sandbar that extends from the beach into the water, forming a border between the Skagerrak and the Kattegat. It is fascinating to watch the seas slump into each other like weary sumo wrestlers.

I take lunch at Brondums Hotel, a beautiful, grand old building, where I eat exquisite fish soup made from a secret recipe and am fussed over by beautiful, grand old waitresses. The hotel was the focal point for the artists’ social lives and was once owned by the family of Anna Ancher, the artist who was Michael’s wife and the only member of the collective who was actually from the town.

Later, I visit a 14th century church that has been almost completely consumed by migrating dunes. Parishioners would routinely dig their way in for services, but by the end of the 18th century they had, perhaps understandably, given up, leaving the building to the elements. All that remains visible is a white tower.

After a bracing stroll along the beach — very much the main pastime here — I head to the harbour for dinner. Although Skagen is small, it is still one of Denmark’s most important fishing ports and the marina is filled with huge seagoing vessels as well as smaller trawlers and pleasure boats. There’s a certain thrill to eating in the shadow of the boats that have actually caught your dinner.

Full of lobster and local beer, I stroll out into the harbour to wait for a taxi back to Ruths Hotel, a charming retreat on the western side of the peninsula. As the sunlight begins to fade and a cool breeze starts to drift over the dunes, it occurs to me that the citizens of Skagen, like those of Aalborg, are probably a pretty satisfied bunch too.

MIKE ATKINS is a sub-editor at The Times.