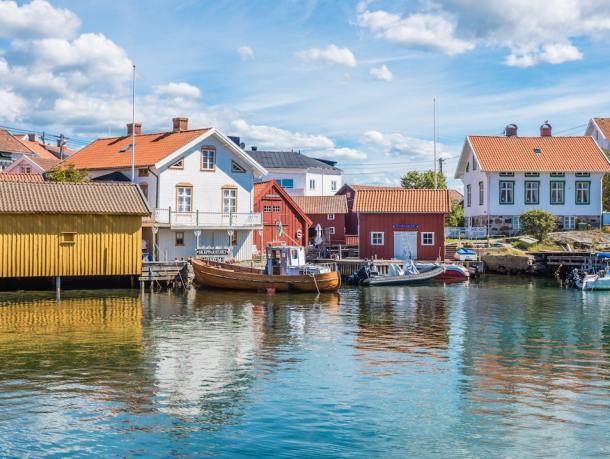 NORMAN MILLER takes the ferry from Gothenburg to some of the lesser-known isles of the vast Bohuslän archipelago, uncovering a secret Swedish paradise…

Shading my eyes from the bright northern sun glinting off a blue- mirror sea, I gaze enviously at Ingrid Bergman’s old retreat a stone’s throw to port as we cruise past the tiny island of Dannholmen. It is pleasingly simple for a Hollywood legend — a green clapboard cottage set amid sensuously undulating boulders, its only mark of ostentation the sculpture of a giant bronze bird with wings spread towards a seascape dotted with islands to the far horizon. While the bird isn’t going anywhere, we glide on through the Bohuslän archipelago. About eight thousand islands and skerries rise here from the cool waters of the Skagerrak, rocky confetti scattered up Sweden’s west coast from the hip city of Gothenburg to the Norwegian border, dotted with characterful museums, yacht havens and fishing hamlets.

Luckily for those of us without a handy vessel of our own, a network of ferries — some summer-only, others year-round — link some of the prettiest islands to Gothenburg and each other, letting anyone, with a bit of planning, weave their own Swedish island odyssey. Mine begins with a Monday afternoon sailing from Gothenburg’s central quay for the three-hour cruise to Marstrand aboard the St Erik, an elegant 19th-century former island post boat now delivering passengers in wood-panelled style. Archipelago settlements provide bursts of colour as we head up the coast, tiers of red and yellow clapboard piled against golden rock. Little boats bob by solitary jetties, and slender lighthouses stand like exclamation marks on tiny rocks. On one otherwise barren islet I’m startled to see a crowd of soberly dressed folk clustered on an outcrop, holding what I can only assume is a memorial for someone who had particularly loved that spot.

St Erik is a fittingly retro-chic way to arrive at Marstrand’s lively harbour, where grand wooden villas, luxury yachts and a skein of car-free cobbled streets frame the stern stone spread of the seveneenth-century Carlstens Fortress, a reminder of more turbulent times when Marstrand was a key frontline defensive outpost against invasion, before today’s peaceful influx of well-to-do mainlanders. While most of the other passengers make do with a ninety-minute potter before sailing back to Gothenburg (the return trip offers an excellent onboard dinner), I maintain the nineteenth-century vibe by staying on at the Grand Hotel, where the red-and-yellow decor of my antique-filled room echoes the cheery colour scheme of much of the town. 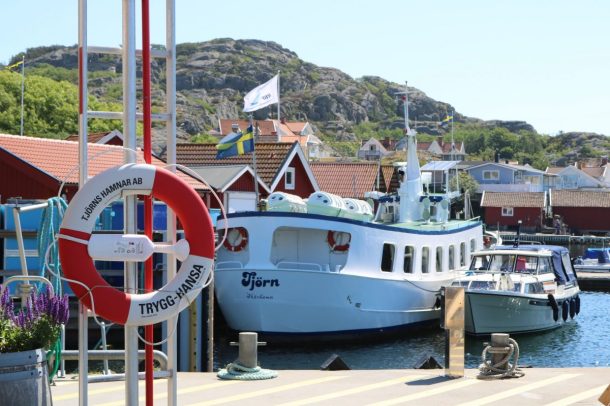 Rising early next morning, I pad along the quiet quay to a little seawater bathing pool by the Strandverket art gallery carved from a craggy old fort by the harbour. The water is on the oh-my-god side of refreshing, but the view across a choppy bay is fantastic — and I get to towel myself dry beside a sinuous steel sculpture by the British artist Tony Cragg. After breakfast I browse a few boutiques, then clamber up to explore the imposing nooks of the fortress. For lunch, I go for Swedish fish and chips at Arvidsons waterfront kiosk — think turbot, mackerel, crab and crayfish rather than cod — then head back along the quay where the gallery has opened to show off a collection dominated by contemporary photography and sculpture. Suitably cultured up, I hike the trail running round the island past bathing nooks and perfect sunning rocks. This being Sweden, there’s also a nude bathing area, although after my chilly morning dip I keep my kit on and head back to town.

I leave on Wednesday morning, hopping aboard the boat to Skärhamn on the island of Tjörn. Like many Bohuslän settlements, Skärhamn grew rich on eighteenth and nineteenth-century herring fishing, but today most people come to loll on a crescent of golden sand, kayak round its islet-strewn bay or follow my beeline to the Nordiska Akvarellmuseet (Nordic Watercolour Museum). The vast windows of this sleek wood-and-glass waterside cube frame bay views to rival anything on the walls. A gaggle of neighbouring modernist wooden studios are available to rent for anyone wanting to explore one of Sweden’s larger islands at leisure, with one option being the eight-mile hike to the sculpture park at Pilane — sometimes dubbed ‘the world’s sweatiest art tour’. I prefer just to enjoy lunch at a sizzling quayside seafood stall, then perch above the beach drinking in an island panorama rounded off perfectly when an old three-master tall-ship sails in. A slightly less grand vessel takes me back to Marstrand in the afternoon to catch the bus for the fifty-minute ride back to Gothenburg.

After a night in a city that a lot of folk consider more appealing than Stockholm, I rise for the bus from Nils Ericson terminal to make the two-hour trip to Lysekil, then board the boat that drops me an hour later at Gullholmen. Gullholmen is one of Bohuslän’s oldest and most charming fishing villages, laced by a filigree of tiny lanes between little white picket-fenced houses. The atmospheric Skepparhuset Museet chronicles its fascinating history in a former captain’s house on the harbour, including how salted Gullholmen herring crossed the Atlantic to provide accompaniment for whiskey in nineteenth-century American saloons. Appetite pepped, I sit on the museum’s sunlit wooden deck and chat to two fishermen who have set up bubbling cauldrons of mussels, which prove perfect for lunch, before I poke around until the boat back to Lysekil. Yet rather than get the next bus back to Gothenburg, I splash out on a taxi for the thirty five-mile drive north to perhaps the most famous of the archipelago’s towns, Fjällbacka.

While it’s no prettier than lots of places hereabouts, Fjällbacka’s renown rests on two famous inhabitants. Bergman came every summer from the 1950s (her statue now watches over a harbourside square), while Fjällbacka became a picturesque crime scene in a clutch of bestselling thrillers written by local lass Camilla Läckberg. In a neat piece of communion across the years, there’s a famous picture of Bergman cradling the baby Läckberg in her arms. I make my last Bohuslän voyage from Fjällbacka’s bustling harbour on a short return jaunt to Väderöarnas, half an hour away. Cruising past Dannholmen on the return leg, I agree with what Bergman wrote about this place: “Huge skies, immense seas … full of enormous rounded boulders and little coves … In the summer, everything so bright and shining.”

NORMAN MILLER is a travel writer.