When Princess Märtha Louise, fourth in line to the Norwegian throne, fell in love with an American shaman, few believed their love was genuine. But, as ANNA MAXTED finds out, the couple have much in common, and the Norwegian public are starting to take their relationship seriously…

It reads like a paperback romance: Shaman Durek, a spiritual guide from California captures the heart of a beautiful princess, Märtha Louise of Norway (certified physiotherapist, divorced, mother of three daughters). Yet, this love story is far from fiction. Having met forty-four-year-old ‘spirit hacker’ Durek Verrett in 2017, and been thoroughly dazzled, I can understand the attraction only too well. The man is mesmerising. We convened in central London – where he will return this week to lead a workshop – for an hour-long healing session, during which he apparently connected with my spirit guides, who turned out to be unnervingly knowledgable about my inner life.

A shaman acts as a bridge to the spirit world, communicating with the dead to impart advice and channel healing energy. Durek uses his ability to free clients of blockages that are preventing them finding love, success, or escaping addiction. He divines information by reading your ‘shamanic signs’. He won’t use plant medicine, preferring to tap into his clients’ natural resources, “showing people the power they have”. It is fair to say Princess Märtha Louise, fourth in line to the Norwegian throne, has always been comfortable with her own power. She is progressive, independent and forthright. Preemptively silencing critics, she added in her online post: “I don’t choose my man to satisfy any of you or the norms or boxes you have chosen in your mind for me to be in”. Despite qualifying, she chose not to practise physiotherapy, instead launching a music-based entertainment business. In 2002, she started paying income tax, giving her more freedom from her constitutional role (though she has declined public calls to renounce her title). That year, she married Norwegian author Ari Behn, but they split in 2017 and share custody of Maud Angelica (16), Leah Isadora (14) and Emma Tallulah (10). What Behn thinks about his former wife’s relationship with the Shaman is anyone’s guess. But if he is anything like me, he will surely be won over.

I had arrived stiff with cynicism, but Durek waved away my outstretched hand and squashed me in a hug. He was charming in his absolute certainty, a whirlwind of energy  consulting ethereal “council members” – possibly including my late father – on issues such as my gall bladder, childhood and sex life. Durek is a shaman for the twenty first century, complete with a crack PR team and a comprehensive social media presence. He is a friend of Gwyneth Paltrow and many other celebrities. Politicians and CEOs seek his wisdom at a cost of $400-$1,000 per detox. His paternal grandmother was a spiritualist and healer, originally from Ghana, who fled to New Orleans to escape slavery – but he was born in Sacramento and is a child of LA. His father is a “businessman” and a Seventh-day Adventist, yet it was his mother, an East Indian Norwegian, who was the driving force for his spiritual growth.

“I was only two years old when I learnt what it meant to be a shaman,” Durek wrote in a 2015 Facebook post. “My mother told me she realised while she was still pregnant with that I was marked and that I’d always been a very special child.” He describes her playing drums, so that he “fell into a trance and was able to see my ancestors” who would “visit” him throughout his childhood, often at night, with the result that he was scared to sleep in his own bed. He discovered his own gift in kindergarten. “I touched this little girl and saw her hair falling out. She was dying of cancer,” he said. “I thought everyone could see it and no one else could”. He devoted himself to shamanic training aged twelve, studying in Bali, west Africa and Israel for fifteen years. He attended a holistic school and has a degree in health education. But it wasn’t a smooth journey. He went through a period of “partying and doing drugs, to being an alcoholic.” On social media, he has described himself as bisexual. 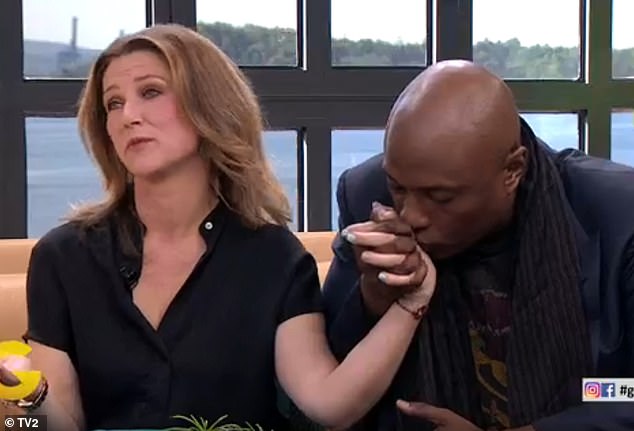 I thought of this while reading Princess Märtha Louise’s Instagram post. “He has made me realise that unconditional love actually exists … He embraces all of me without question … I feel so happy and blessed that he is my boyfriend,” she wrote. Durek (121K followers) also posted, praising his princess as a “bright light of wisdom, profound grace and immense beauty.” Märtha Louise has more in common with her shaman than it might first appear. Twelve years ago, she co-founded a spiritual centre’ – or as the Norwegian media call it, an ‘angel school’ – providing classes in ‘healing, reading and touching’ (it has now closed). She also reportedly believes she can communicate with animals and angels. During a joint appearance on Norwegian television he was forced to deny claims he can cure cancer and defy ageing. He also communicates with animal spirits and has been vegetarian for two decades. “When I eat something that’s dead,” he told me, “I feel all of it. All the memories of that animal, when it died, how it died, what it went through”. (He also claims to have come back from the dead himself, following an undisclosed illness that put him in a month-long induced coma). No wonder, then, that she and the Shaman bonded after being introduced last year. That the pair have so much in common will no doubt stand them in good stead during their latest ventures. This spring they embarked on a multi-city Scandinavian speaking tour, ‘The Princess and the Shaman’, tickets for which started at 567 NOK (£53).

Despite his connection to the ancient world, Durek embraces modern life. He’ll take an Uber, not a train, as it’s too noisy. He’s neither materialist, nor ascetic. “I love opera,” he tells me. “I like hiphop. I won’t go to a pop concert, but I will go to a country music concert.” He loves gaming, but not violence. He also loves action figures. Ultimately, though, Shaman Durek wants to teach his high-profile clients how to live authentic lives. Märtha Louise, patron of eight charitable organisations, appears to share his values. At Easter, before confirming their relationship, the couple posted a photo of themselves wearing bunny ears, sending “love and blessings to every soul in the world”. It seems like a match made in spiritual heaven.

ANNA MAXTED is a journalist and novelist.