MIKE PATTENDEN managed to tempt his photographer son, Scott, on an Icelandic road trip with promises on spectacular scenery (and playlist autonomy) and it didn’t dissapoint…

On the summer solstice in 2016 the avant-garde rock band Sigur Rós live-streamed the twenty four hour circumnavigation of Iceland via its 827-mile ring road, Route One. As I sat transfixed by this hypnotic slice of slow television, the germ of an idea took hold. The annual snowboarding road trips I had been taking with my son, Scott, had stopped in recent years and maybe Iceland would kindly his desire to go on holiday with his old man once more. I proposed a week-long Route One road trip that, as a professional photographer, he was unable to refuse. And so, to the strains of Sigur Rós, we set off in a rented 4×4 through the ‘land of fire and ice’. It was a busy itinerary, but it was the last week of April and the days had started to lengthen.

Our first waypoint was Hvítserkur or ‘Dragon Rock’, a fifty foot basalt sea stack on the eastern shore of the Vatnsnes peninsula. Within an hour of leaving Reykjavik the roads emptied, the countryside turned rugged and the sky filled with unusual clouds. A hundred miles in we turned onto a track beside tidal lakes and steep hills. It was easy to see why the stack is so names and why it is a national monument so treasured that in the 1950s its legs were shored up with concrete to save it from the sea and possible earthquakes. Down on the beach Scott put up a drone while I examined the fine obsidian sand. Iceland has only a handful of golden beaches, most of them in the Westfjords.

Rolling on through Akuyeri, Iceland’s second city, we stopped at the geothermic region region around Lake Mývatn, dubbed the ‘diamond circle’ as it’s crammed with natural phenomena. By the lake we found Dimmuborgir or ‘The Dark Fortress’, a twisted mass created by hot lava streaming over ponds, trapping water and causing steam to issue through vents, forming distorted pillars. A mile on, we hiked up Hverfjall, a huge crater with panoramic views. Unsurprisingly, Scott’s camera chattered busily. Gazing into the crater of Víti or ‘Hell’, another explosion crater ten miles north of Route One, the silence was broken by the chirping of a lone snow bunting. About three hundred feet behind sat a set of aluminium domes capping 6,500 feet boreholes. These channel heat down the hillside via steel pipes to a power station that supplies geothermal energy to the region.

Twenty miles east we took another side road, heading half a mile through volcanic rocks that parted to reveal white water rushing into a canyon. Dettifoss, the most powerful waterfall in Europe, threw up some fine spray that projected a double rainbow onto the band nearest us. Tourists huddled at viewing points, but a few hundred feet up the Jökulsá á Fjöllum river, which feeds the waterfall, we found things were more deserted. En route back to our smart Icelandair hotel at Mývatn we dared each other to touch boiling springs. 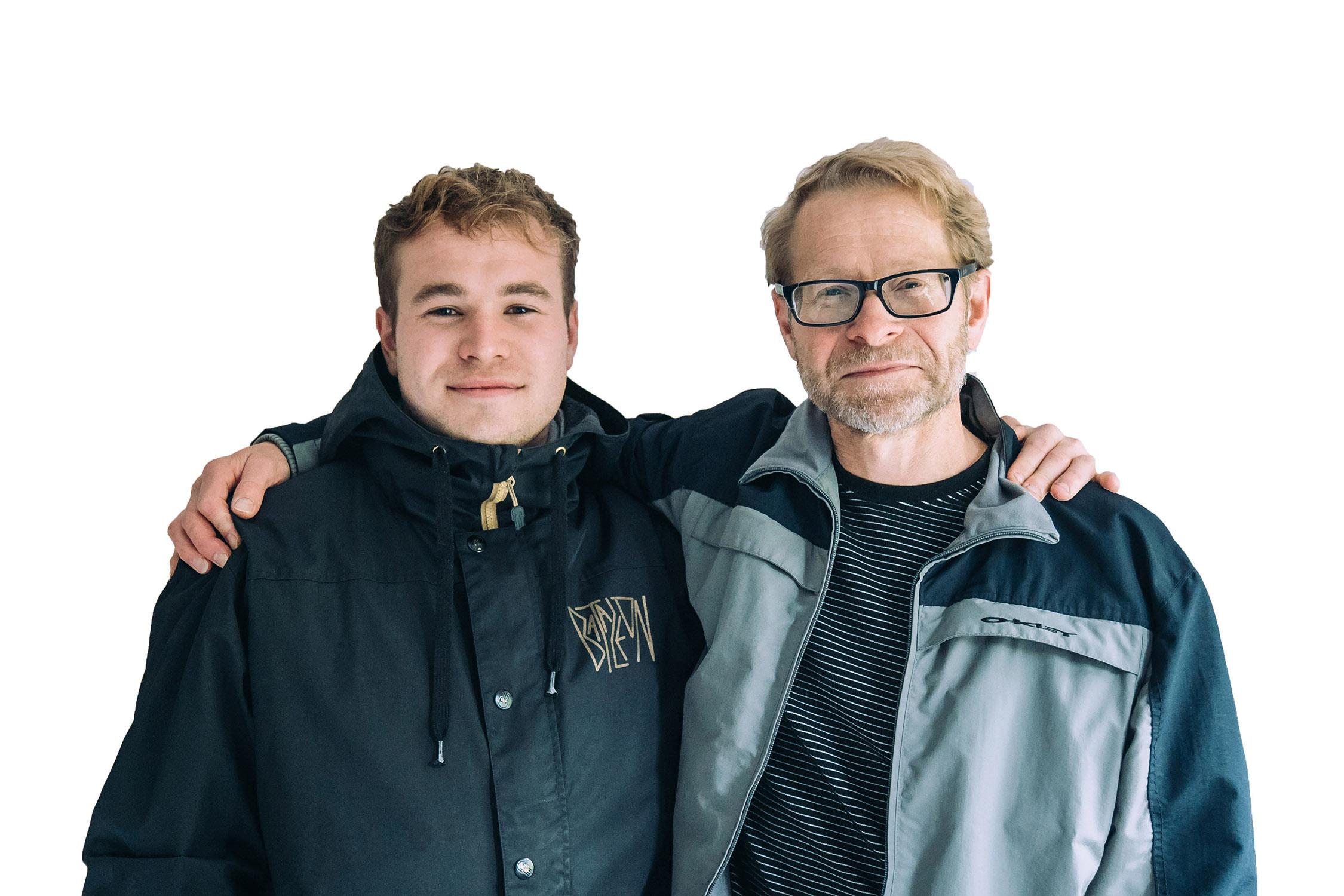 Mike and his photographer son, Scott

At the eastern edge of the lake, Route One turns southeast, skipping along the coast. We abandoned the route at this point, opting for the Arctic Coast Way, a new stretch of road that officially opens this summer. Seabirds swooped around the car as we cruised, entranced by mountains on the distant shore. It was mile upon mile of meditative beauty, proving the drive had become more entrancing than the attractions. Scott only just missed a shot of an Arctic Fox that dashed out in front of us on the way to Raufarhöfn, home to the ‘Arctic Henge’, a sundial of rocks erected to frame the midnight sun. Sadly, it lacked atmosphere, but as we made our way through Raudanes, a run-down fishing village, we caught sight of an orange lighthouse glowing on the tip of a headland.

Pushing south, our playlist long since expired, we entertained each other by googling facts about Iceland, discovering that one in three people have guns, yet the country boasts one of the lowest rates of violent crime anywhere in the world. Arriving in Höfn, famed for its langoustines, we checked in to a guesthouse by the harbour run by a jolly landlady who, when I offered the money, grabbed the notes and stowed them in her bra. Beyond Höfn, Route One cuts between a stretch of land and water at Jökulsárlón, a lagoon scattered with icebergs calved from the Breiðamerkurjökull glacier. We pulled in at Hali, where a local farming family run tours. Tall, bearded and blue-eyed, Vésteinn Fjölnisson, our guide, may have been sourced from a Viking casting agency. He took us off-road in a Toyota truck fitted with vast tyres, passing grazing reindeer and small yellow hovercraft that reminded me of Thunderbird 4. Within minutes we were in the centre of the lake. Vésteinn cut the engine and we floated amid radiant blue icebergs close to a family of seals. Fishing a piece of polished glass ice from the river, Vésteinn told us it would probably disappear in two hundred years. That night, we holed up in a tired hotel in Skaftafell. Rather than eat in its uninviting restaurant, we went to eh truck stop across the road. Lorry drivers sipped cans of 7 Up and watched Champions League football on a tatty screen while we tucked in to bland arctic char and strange sausages. 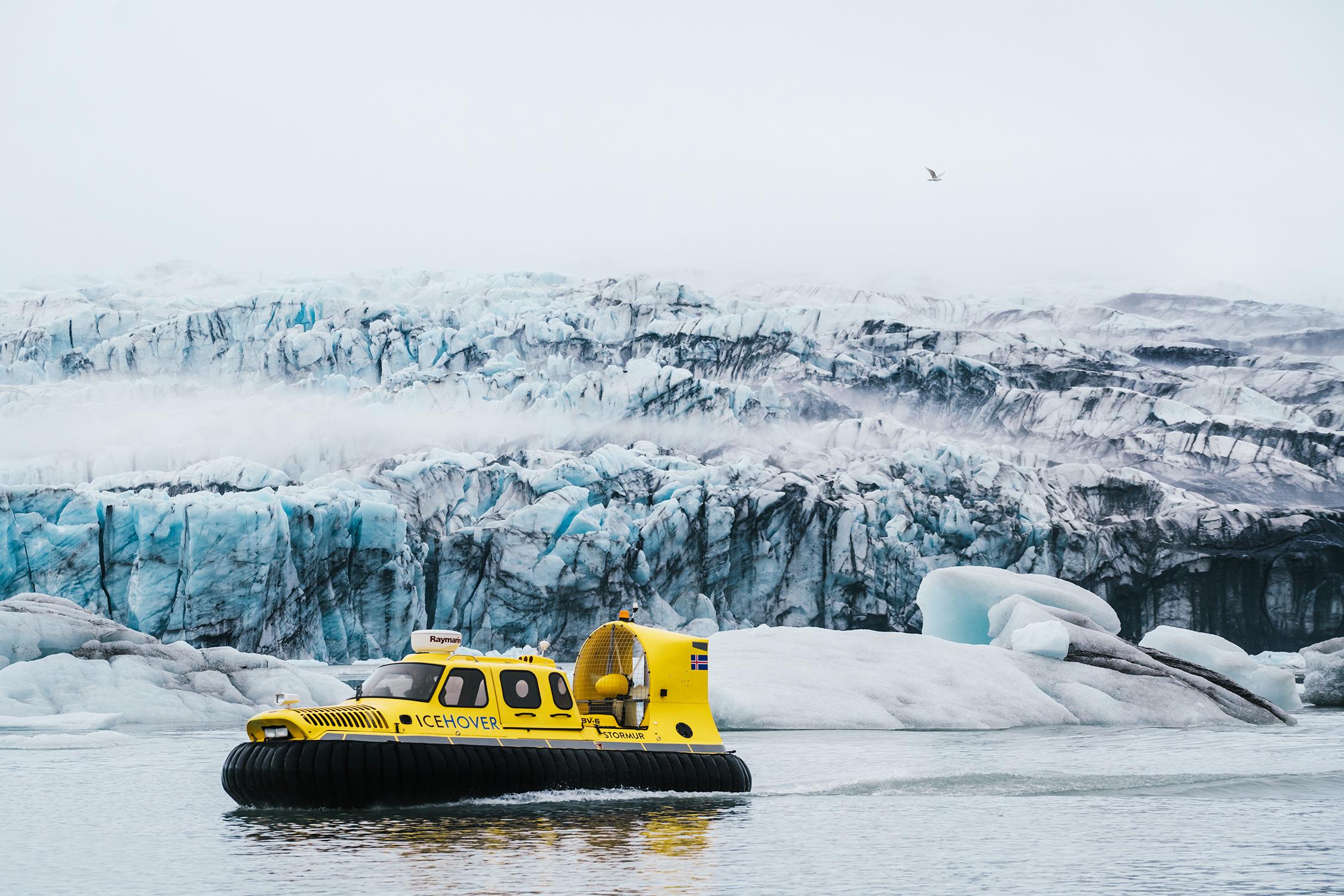 Route One continued to skirt the southern coastline, ploughing through a vast plain. It was finally joined up by a bridge over Skeiðarársandur in 1974, and as we crossed the bridge we were hemmed in by mini mountains that reared on either side and islands claimed by jökulhlaup, a type of glacial flood that pushed the sea back for miles. Urged for a photo op by Scott, I was drenched by Skógafoss, Iceland’s biggest waterfall accessible from Reykjavik, but less touristy than those on the ‘Golden Circle’. Taking a detour via the Strokkur geysir, we toasted the trip in Reykjavik and the rekindling of the father-son bond.

“I saw tears in your eyes that day in the north,” said Scott.

“It was perfect, I couldn’t help myself,” I replied, staring into my glass.

MIKE PATTENDEN is a freelance journalist and author.

SCOTT PATTENDEN is a photographer and videographer, specialising in shooting automotive content and fine art.