I was alone of the summit of Ørnfløya, and all was silent save for the swoosh of waves below. To my left stretched a snaggle-toothed ridge of peaks. Colourful clapboard houses ringed the coves of nearby islands, rust-red and amber shingles, here and there a grass roof. Beneath my solitary eyrie the waters lapped white coral beaches, playing a soothing symphony of rush and retreat – nature’s aural exfoliant, smoothing the soul’s rough edges. With a wistful sigh I reclined on a convenient outcrop, sending heavenwards a wish that the balmy June day would never end.

And then, improbably, it didn’t. There’s nothing supernatural about the midnight sun, of course. I knew that here in the far north of Norway, tow hundred miles above the Arctic Circle, the sun had risen a month earlier and wouldn’t set until late July. But knowing and understanding are two different things, and experiencing twenty four hour daylight for the first time was messing with my psyche in unexpectedly uplifting ways. I felt a surge of wellbeing and energy – I could do anything, at any time – yet I was oddly serene and relaxed. The denizens of those gingerbread cabins that I had admired from my rocky perch felt much the same. Sommarøy (literally ‘Summer Isle’), a gorgeous speck thirty five miles west of Tromsø, was in the headlines recently when it launched a bid to become the world’s first time-free zone. Residents are campaigning to liberate themselves from the tyranny of clocks during those long weeks of endless daylight; free to drink coffee on the beach at 2am, to paint their house, to swim. Or – surely the most tempting option – go for a stroll.

The solar-charged spring in my step was particularly welcome because I had come to hike. I was striding out on a new three-centre self-guided walking holiday exploring Sommarøy and neighbouring Senja, mainland Norway’s second largest island, billed as the ‘new Lofoten’. With its sheer-sided peaks, skerry-speckled fjords and winsome fishing villages, this region has that more southerly archipelago’s Instagram appeal, but not, as yet, the tourist hoards. Over a week I met no more than a dozen other walkers; indeed, some days, I wandered entirely alone. And whereas scenic hotspots on the Lofoten Islands periodically bulge with cruiseship tours during high season, traffic on Senja’s roads is delightfully sparse.

“Whereas scenic hotspots on the Lofoten Islands periodically bulge with cruiseship tours during high season, traffic on Senja’s roads is delightfully sparse.”

My trip began with an hour’s drive from Tromsø airport to Sommarøy. There, a comfortable hotel in a small cove was my base for a handful of hikes, including the easy ascent of that mini-mountain Ørnfløya. On my first leg-stretcher, though, I conquered the nearby headland of Hillesøya. Like most of the routes on this itinerary, the trail alternated rocky scrambles – aided by chain ropes stapled into quartz-streaked stone –   and spongy moss. Although a mere three hundred feet or so high, the summit rewarded me with panoramic views south to Senja and north to the looming island of Haja, the distinctive outline of which – one rounded flank and one steep cliff plunging into the North Atlantic – reputedly inspired Tromsø’s Arctic Cathedral, as well as Sommarøy’s more modest church. Rounding the headland, I descended between dwarf jumpers to skirt gleaming beaches foraged by orange-legged oystercatchers and fringed by the clearest of jade-green waters. No wonder it has been dubbed the Arctic Caribbean. Yet, though it’s relatively balmy thanks to the Gulf Stream – summer days can nudge 20C, – a toe dipped tentatively into these alluring waters quickly reminded me that I was above 69 degrees north.

If the Arctic Caribbean is a more convenient destination that St Lucia or Antigua, it certainly isn’t cheaper. A smallish beer or glass of wine costs upwards of 86 NOK (£8) and a simple dinner could top 215 NOK (£20). So going half-board on this trip was a relief, and there was no compromise on quality. At all my hotels the three course dinners showcased local ingredients, particularly and unsurprisingly, fish. Breakfast buffets included top-notch cured and hot-smoked salmon, fish soups were rich and sulky, and cod tongue – a local delicacy – was an unexpected delight: slightly chewy, coated with panko and served with hoisin an chilli mayo, it was a reminder of the importance of cod to the region’s economy and gastronomy.

After a couple of days roaming the trails around Sommarøy, I boarded a ferry for the forty five minute voyage south to Senja proper. Here the roads are quieter, the paths wider, and the peaks taller. One of them above all demands to be gawped at up close: Segla, ‘The Sail’. Senja’s most photographed landmark (which isn’t saying much) is a flat-faced, sheer monolith leaning dramatically over the Mefjord. Yet while the masses (again, a relative term) climb Segla, the cognoscenti head for the adjacent Barden. At 2,160 feet, it’s a touch higher than the brochure cover star and, more importantly, provides the best views of its better-known neighbour. So I laced up in the fishing hamlet of Fjordgård to stride out across quaggy moss marshes and forests of bare-branched birches budding in preparation for the brief summer of intensive photosynthesis. Waterfalls tumble across the valley, foaming tendrils fed by meltwater from snow patches through which the steep trail climbed. Within an hour I was sweating beneath that indefatigable sun, grateful  to sink knee-deep in cool, crisp snowdrifts. 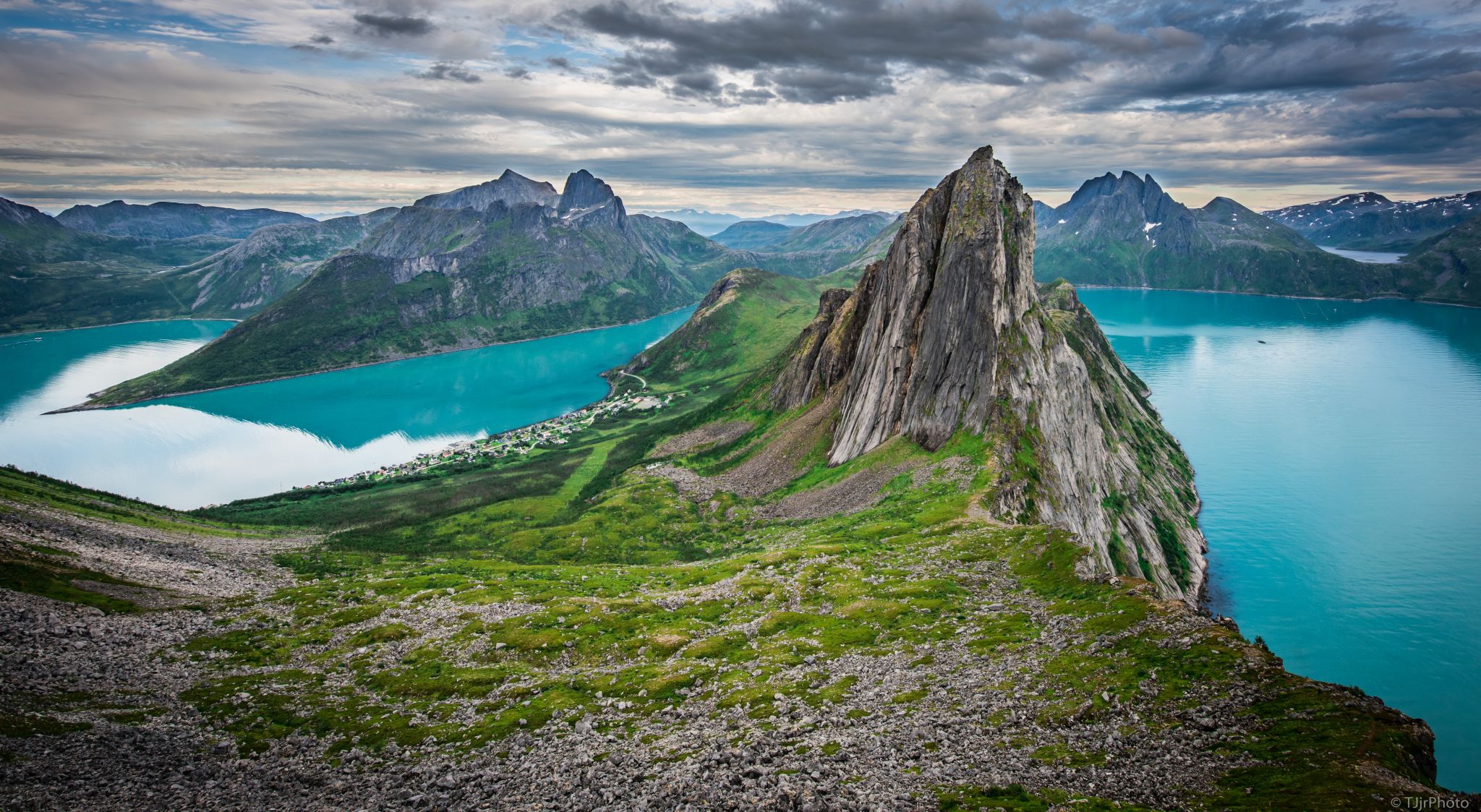 As I reached the rock field at Barden’s summit, my jaw hit the snowy deck. Northwest snaked a craggy ridge, Segla at the fore. Below sat Fjordgård and the isle of Hosøy afloat in the Øyfjorden. To the southwest I spied my next stop, Mefjordvær, guarded by its own spectacularly jagged range. Equaling my awe of the scenery was incomprehension that the walk to this magnificent viewpoint on such a glorious day was untrodden by anyone but me. I didn’t see another hiker until I returned to my car, damped-toed but thrilled, three or so hours later, and encountered a rock ptarmigan in its white-and-brindled spring plumage, startled as I ambled past its rocky perch.

Mefjordvær, home to my next hotel, is an end-of-the-road hamlet that gazes east across the fjord with which it shared its name, looking towards Segla and Barden. It’s backed by a yet more dramatic array of peaks nicknamed the ‘Devil’s Jaw’. From this base I tackled a rocky scramble a mile or two along the shore, past the standing stone known as ‘the monk’ (some imagination required) to the headland of Skøyteneset, beneath white-tailed sea eagles soaring on seven foot wings. Then came a route punctuated not by mountain panoramas, but a different kind of magic. My notes called the circuit ‘Stordalen Marshes’, a woefully unappealing moniker for a forested wetland that might accurately be described as enchanting. If Barden is Odin and Thor, this is Peer Gynt and the Brothers Grimm. Blissfully I meandered between boulders sporting dense toupees of moss, among budding birch and rowan forests, around lakes on which gulls and ducks preened and dabbled, and past alluring Hansel and Gretal cabins.

After a couple of hours inhaling concentrated fresh Norseness, I paused for a picnic at a gapahuk, a traditional wooden lean-to adorned with carved statues and brief stories about Huldra, according to local legend the secret seductress of the forest. Blonde and beautiful, wealthy and successful, if you ignore the tail hidden under her skirt, Huldra sounds perfect. Indeed, it was only the lure of that evening’s three-course feast that tore me from her bewitching hideaway.

My final stop, Hamn i Senja, is no longer a working village. A short drive takes me to Kaperdal, where I step over a mountain of little brown lozenges piled on the path – a moose in the middle –  to reach the turf, bark and branch home of Nikolai Olsen Kaperdal of the Sami people. Now an open air museum, the home he bult and regularly rebuilt provides insights into the traditional Sami lifestyle. Then on to Skaland for another marsh and mountain combo climb up Husfjellet, my final plot through snowfields to the summit rewarded with the most epic vista of all: ridges like razors, fjords like mirrors and islands like emeralds. That final evening I sat on my veranda in Hamn i Senja, gazing west at the honeyed sun hanging low above the Bergsoyan archipelago. Alone again, with an audience only of sea eagles and black cormorants.