He’s lived in Hungary, Germany and Transylvania, but BENJAMIN MITROFAN-NORRIS was so impressed with Finnish café culture that he decided to set-up a Nordic café in Bristol…

You’ve lived in Hungary, Germany, Transylvania and Finland. What was it about Finnish café culture that struck a chord with you?

I remember the first time I went to Finland – way back in 2006 – I did what most tourists do and headed to the market on the harbour. There, I came across a tiny café, selling simple open sandwiches: just a piece of rye bread, topped with slithers of cured salmon, butterfish, and whatever else had come in off the boats. It was the simplicity of it all – along with the visual impact – which really excited me. Before long, I was a regular, and a firm fan of this kind of dining. The coffee scene in Helsinki is astounding, and the Finns drink more coffee per capita than any other nation on earth. While most their intake is unimaginative filter coffee (almost an all-day drink rather than a morning pick-me-up), they were well ahead of the curve with artisanal coffee, too. The Finns don’t eat a huge amount of cakes, though, although their pastries are as good as any others in northern Europe.

Your café is very clean and minimalist. Do you think this makes conversation easier and people more relaxed?

Yes. My wife and I really dislike the whole shabby-chic thing – mismatched tables and chairs make us cringe – so when we decided to open the Nordic Café, we knew we’d go with a sleeker, more minimalist look. It’s relaxing, airy, and perfect for meeting friends or having a quick solo lunch (we have a lot of solo diners), and it doesn’t make you feel like you’re in your grandmother’s living room … Because, if we’re honest, most grandmothers don’t know how to make a top-notch flat white! 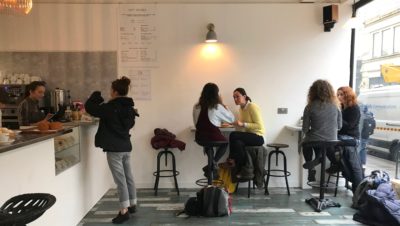 As well as pastries and cakes, you also serve lunch and breakfast. Has this been popular?

Our Swedish carrot cake (lighter, sharper, and tastier than its English cousin) is probably the closest thing we have to a signature cake. However, our eastern European cakes (my wife is Transylvanian) are also very popular. We try to do something different each day, and firmly believe in the power of fika, those little breaks from reality, bolstered by a piece of homemade cake and a proper coffee. As for the lunches, our main thing is smørrebrød, or open sandwiches. Inspired by those savoury treats I first encountered at Helsinki market, they’re an opportunity to get creative with flavours and presentation, and to let the quality of our ingredients shine. The nice thing about smørrebrød is that they’re lighter, more digestible, and far less bread-heavy than English sandwiches. Where else in Bristol can you get a mountain of Wye Valley salmon on rye bread, topped with home-fermented pickles, or a cured herring fillet, or a thick wedge of goat cheese and walnuts? They really allow us to play with ingredients and make the kinds of combinations we love to eat. We also prepare a daily lunch special, which depends entirely on what’s in season, and what I feel like cooking in the morning. Our Baltic stroganoff is very popular, as is our take on mushrooms on toast.

Do some people know already about Nordic food, or has it been a new experience for most?

It’s hard to say. I always tell people that we’re just a normal cafe at heart, serving coffee, cake and light bites. The ironic thing is that English food isn’t so different from Nordic food’s roots: lots of herring, cured and fermented ingredients, and not such a big emphasis on meat and processed rubbish. We occasionally get people asking for sausage sandwiches and leaving in fury when we offer them pickled fish. As far as I see it, there’s enough choice on North Street to suit every palate.

What makes your regulars return?

Hopefully, the combination of quality homemade cakes, interesting lunch options, beautiful coffee, and a genuinely European vibe, all at a realistic price.

The Nordic Café is on 39 North Street in Bristol.

This article has also been published in Nordic Style Magazine, Scan Magazine and Epigram.