‘Home’ feels too uncertain a notion to invest in these days – decoratively and emotionally – and sometimes decor becomes an afterthought, as SARAH AMANDOLARE explains…

I’ve spent much of my adult life amid other people’s decor, housesitting or renting places furnished with the things they left behind. I have left things behind myself – IKEA nightstands and dollar store mirrors – and seen subsequent tenants happily scoop them up. For the most part, my comfort with impermanence has outweighed the discomfort of sleeping on someone’s used couch. For better or worse, I think of myself as an explorer of domestic spaces, rather than a true inhabitant. And I’m not alone. We’ve long looked to the stuff of a home for clues to personality and status, but today, the color of your walls or the brand of your coffee table is no longer a reliable measure of who you are.

The concept of decor as self-expression started taking off in the early twentieth century. Advertising sold us on finding ourselves through things, while child development psychology began to show up in home-decorating books. The combination convinced parents to let children pick out wallpaper, ‘enabling them to express their real selves’, and give teenagers private bedrooms where they could ‘become a personality’. By mid-century, Seventeen magazine called girls’ bedrooms ‘a record of what the woman was and is and will be’ and the Better Homes and Gardens Decorating Book was urging readers to take an individualized approach to decor with the prompt, ‘it’s your home, what kind do you want?’

But today, in a world where more of us move often, live in temporary accommodations, work from our bedrooms, or share space with adult housemates, the way we decorate is more often an afterthought than a carefully executed statement. For many of us, ‘home’ feels too uncertain a notion to invest in, decoratively, emotionally, or otherwise. Alison J Clarke, professor of design history at University Applied Arts Vienna and a trained social anthropologist with a specialty in material culture points to the success of IKEA as being emblematic of this shift. “The reason IKEA is so successful is that it’s the exact opposite of self-expression,” she said. “It’s self-expression within a limited repertoire.” IKEA also suggests temporariness, which suits what the home interior has become, according to Clarke – “a place of transience rather than permanence”.

She has a point. The American demand for rentals reached a twenty-year high in 2014, according to Harvard’s 2015 State of the Nation’s Housing Report. And renters are far likelier to move frequently – 24.5 per cent of renters moved between 2013 and 2014, compared with 11.5 per cent of the total population, according to 2015 US Census statistics. Plus, more young adults are moving to cities and not getting married, according to Harvard’s Joint Center for Housing Studies, which means less space for decor and less disposable income for buying any.

It all adds up to the fact that we don’t live the way we used to, and our relationship to home and its material trappings has changed. We don’t necessarily reveal ourselves, or our place in society, by way of decor anymore, because we might not have as much, or any all. And despite how simple online shopping might seem when it comes to picking out things to hang on empty walls, decorating is more complicated than just buying something and bringing it home. There’s the matter of framing a poster (which can sit rolled up for years) or figuring out where to hang a new painting.That’s the tricky stuff, the stuff that takes effort – after the purchasing takes place. “People always live somewhere between the ideal and the non-ideal,” Clarke said. 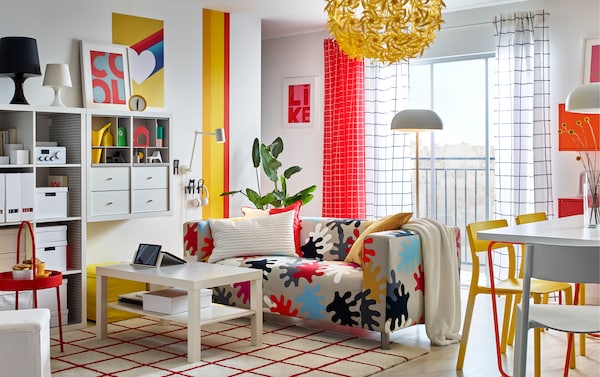 “People always live somewhere between the ideal and the non-ideal”

And yet, we feel sheepish admitting as much. Instead, we remind visitors that our decor is still in progress, that we are en-route to the ideal. Or we avoid having visitors at all. “Not being finished makes some people feel ashamed, exposed, as if their rooms – and they – were undressed,” wrote journalist and film-maker Joan Kron in The New York Times in 1977. The title of the piece, I’d Love to Have You Over For Dinner … but the House Isn’t Finished, would not seem so out of place today, nor would the temporary decor – a picnic table in the kitchen, a couch borrowed from a friend – chronicled within. Many of us live in a state of flux, and our homes reflect as much. But maybe there’s nothing wrong with that.

“In a way, the house should never be finished because it’s a living object,” Kron told me. “As you grow and you get older, you want the room to be different.” And we can’t really hide behind temporary decor anyway. The white-lacquered coating on the picnic table in Kron’s story; the painting propped against a wall rather than stored in a closet; the hand-me-down IKEA nightstand – our decor is awash in details suggestive of how we live and relate to others.

In 1977, University of Chicago sociologist Mihaly Csikszentmihalyi, now a Distinguished Professor of Psychology and Management at Claremont Graduate University, wondered about the flipside: how we relate to decor. He teamed with University of Notre Dame sociologist Eugene Halton to interview dozens of families – of different races and classes, and in which three generations lived in the Chicago area – about their most-cherished household objects. The results, included in their 1981 book The Meaning of Things: Domestic Symbols and the Self, suggested that home objects carry great value, reinforcing our memories and binding us to family and friends.

Unsurprisingly, interviewees often found meaning in heirlooms: books engraved with family names, and antiques and glassware from their grandparents. “People often think they can dispense with things,” Csikszentmihalyi said. “If the only things that matter are inside your head, then you live in a very vulnerable world.”

SARAH AMANDOLARE writes for The Guardian.