A ten-dog husky team is transporting arrivals at Sweden’s newest airport to the ski resort of Salen. SEAN NEWSON and family are the first to take a ride…

Woof, woof, snow fiends! There’s a new way to get your tail wagging at the start of a ski trip, and it comes courtesy of the world’s most wintry airport transfer service: a ten-dog team of huskies in the mountains of western Sweden.

There you are, wrapped up in the twenty first century — fussing over your luggage and scanning roaming-charge texts from your phone company. Then, suddenly, you and your family are on the back of a birchwood sled while the world’s most willing team of animals whisks you into another world. Frosted birch trees drift by like ghosts, and all you can hear — apart from the “Mush paw!” calls of the driver — is the deep sigh of the wind, working its way across a snow-drenched landscape. It’s as though you’ve fallen out of the back of a wardrobe and rediscovered Narnia. As the cold begins to bite, and you’re worrying that your five-year-old has turned into a popsicle, you round a corner and, hey presto, you’re back in 2020, on the edge of Salen, arguably the largest ski resort in Sweden. The ride has lasted only 40 minutes, but you’ll be talking about it for the rest of your family life.

“Whoa!” I hear you cry. “Hold your huskies. How is this possible? Stockholm’s airports are two hundred miles away. Have you been eating Swedish toadstools?” No. This fantastical four-legged service is possible because a new airport has just opened on a remote and snowy plateau fourteen miles west of Salen. Scandinavian Mountains Airport is designed to attract a new audience to two of the biggest ski resorts in Scandinavia. Salen is one; Trysil, a fifty-minute drive away in Norway, is the other — and the first direct service from Heathrow is scheduled to land on Saturday. With a flight time of 2hr 20min, followed by quick transfers at the other end, it’s an enticing prospect. Even if you don’t jump on a dog sled. 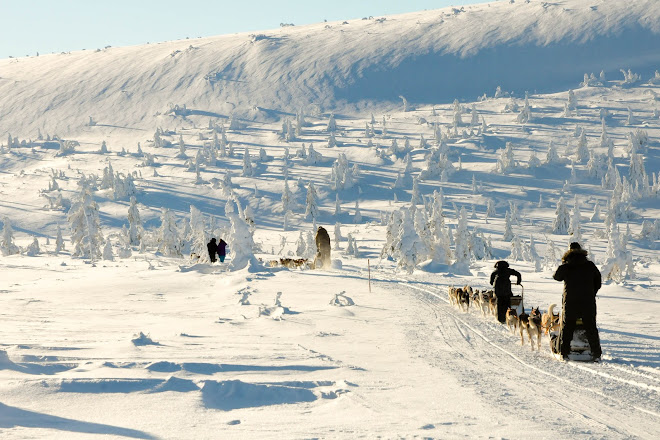 We sampled both resorts. They’re strikingly different, given that they’re only thirty miles apart. Salen is the gentle giant, a cute suburban sprawl of winter playgrounds where snowmobiles scoot along forest tracks and downhill skiers vie for prominence with their cross-country cousins. Many of the latter are in training for the Vasaloppet, a fifty six-mile cross-country marathon that attracts nearly 16,000 competitors each year. The rich mix of sports is a reminder that, in Sweden, winter is a way of life for everyone — it’s not just something that’s laid on for the tourists. Meanwhile, the downhillers get four mountains to play on. Actually, to call them mountains is an exaggeration. To the Swedish, they’re fjalls, and if you know the Pennines, you’ve got a good idea of how they look: flat-topped, smooth-sided and pretty consistent when it comes to the pitch of their slopes. Beginners learn at the bottom, while more experienced skiers zigzag their way up and down the north-facing walls. If they’ve got the strength, they can ski until 6pm every day, thanks to floodlit slopes in all four areas.

Salen lacks the splintered, soaring splendour of the Alps. Getting between the two main areas of slopes, at Lindvallen and Tandadalen-Hundfjallet, is also a pain if you don’t have a car: the local buses run once every three quarters of an hour, each way. But there are compensations — Sweden’s extraordinary good manners, for starters. I’m not just talking about the guys who work in the ski-rental centres, or those who teach you how to ski or serve you dinner. You can also see it in the architecture, which is unfailingly low-rise, well proportioned and timber-clad. We stayed at the Hotel Bugelhof, in the Lindvallen area. Halfway between a Cape Cod house and your favourite coffee shop, it’s as cosy as a fireside chat.

Both our boys prospered on the broad, efficient pistes. Ben, 5, rode his first button lift unaided, and made ever more confident turns. As for Sam, 11, this was the moment when he suddenly, without warning, pinned back his ears and left both his parents for dead, weaving through Sunday-afternoon skiers until he was a distant blue blob at the bottom of the slope. Then, when the lifts shut, he spent two hours flinging himself down the water slides at the Experium aquatic centre. By the end of the first day, his smile stretched almost to the Arctic Circle.

Trysil is a tougher nut. All the skiing takes place on the 3,715ft Trysilfjellet — and it’s a bigger, shapelier and more varied venue than Salen. Up top, the pistes are generally broad and gentle, but on one part of the lower mountain, they plunge straight down a steep slope, just as a boulder would. The result is the best six-pack of black pistes I know: thrillingly sustained. Skiing them helped to burn off the enormous breakfasts we had at our crisp and comfy slopeside hotel, the Radisson Blu Mountain Resort. Trysil is not a substitute for big, ballsy Alpine resorts such as Val d’Isère, St Anton or Chamonix. Proper experts should stay put. But for experienced parents, there’s enough here to spice up the precious hours while your children are at ski school. As in Salen, tuition is supplied by a team of young, humble and hard-working instructors, and is, in our experience, at least as good as anything you’ll get in the Alps. In Trysil, however, it’s strikingly more expensive. Five half-day lessons cost 2,670 NOK (£228), compared with a starting price of €159 (£134) with the ESF in Tignes, France. In Salen, the price is 2,000 SEK (£160).

You should also bear in mind that in both resorts, lessons for children under seven are only seventy five minutes long. That’s barely enough time for you to click into your skis and ride a couple of chairlifts. If the grown-ups want to get in any decent skiing together, they’ll have to hand over their little ones to the local childcare centres. Two hours cost 275 SEK (£22) in Salen and 260 NOK (£24) in Trysil, but it’s worth noting that the British tour operator Ski Norway includes free childcare in its Trysil packages for half-term and Easter.

Whatever level you ski at, I’d still recommend starting in Salen, at least for a night or two. The reason is simple. That way, you get to launch your holiday by dog sled. The price, I should warn you, is steep: 5,070 SEK (£405) per sled (which will comfortably carry two adults and two children), including luggage transfers to your hotel. You need to prepare yourself for some pretty fruity smells, too — huskies don’t stop for loo breaks. But it’s worth every whiff to share their journey and to feel their sense of purpose in such an alien and beautiful landscape. The dogs are, by the way, completely silent as they work. It’s your kids who’ll be yelping with excitement.

SEAN NEWSOM travelled with SAS, whose flights from Heathrow end for the season on 11th April 2020. He writes for The Times.