As climate change makes winemaking a torrid business in southern Europe, JON HENLEY finds that viniculture is taking off in Scandinavia…

In a corner of his whitewashed 18th-century homestead, Håkan Hansson – the fifth generation of his family to farm this gently undulating stretch of land in southern Sweden – keeps a worn set of diaries, but not just for sentimental reasons. From the early 1950s, Hansson’s mother, a keen amateur meteorologist, meticulously wrote down every detail of the weather in Skåne county. Her records show why, seventy years later, her son is now one of a fast-growing band of increasingly successful – and award-winning – Swedish winemakers.

“It’s really quite clear,” said Hansson, a former financier who planted his first vines on the south-facing slopes of what is now the Hällåkra vineyard in 2003, and today has about 22,000 on 6.5 hectares. “We have an extra month of summer now. And winters are not like what they used to be. That’s why we can make wine, and why fifty years ago, we couldn’t.” September, Hansson tells me, used to be the month when temperatures would plummet, but not any more: “Now we’re seeing daytime temperatures of 24C or 25C, even at the end of the month, with perfect, cool nights. Impossible when I was a kid, and not very different from Burgundy.”

Even a decade ago, few would have bet on Scandinavia becoming a serious producer of quality wine. But while temperatures of up to 48C grilled grapes on the vine in some traditional wine-making areas of southern Europe last summer – costing some French growers up to 80 per cent of their crop – global heating is incubating a whole new industry in the Nordic region. Denmark now has about ninety commercial vineyards, compared with two in 2005, while Sweden has fifty. A handful of bold pioneers are growing grapes in Finland, and the world’s most northerly functioning vineyard overlooks Norway’s largest fjord. They are, of course, infinitesimally small beer compared with the more established winemakers of southern and central Europe: according to Sveneric Svensson of the Swedish Wine Association, Sweden has barely 125 hectares of land under vine, against an estimated EU total – mostly in France, Italy and Spain – of 3.3m. Output is tiny: Sweden produced less than 450,000 litres of wine in 2019 (France alone made more than 4.5 billion).  “We are still very much in our infancy,” Svensson says. “But commercial production is now serious. And the quality of the wine is very encouraging. There’s excellent feedback from around the world.” 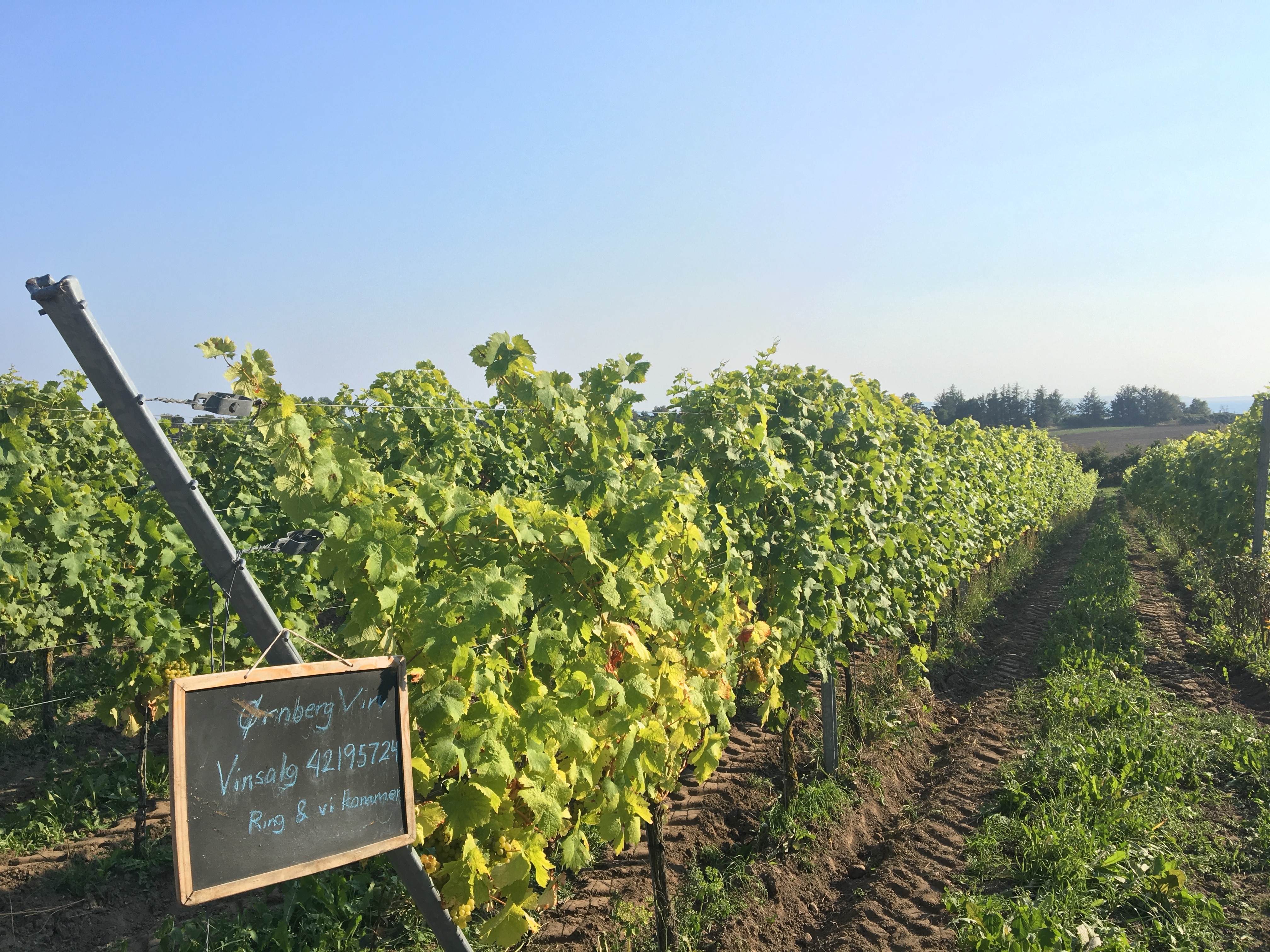 “We are still very much in our infancy. But commercial production is now serious. And the quality of the wine is very encouraging. There’s excellent feedback from around the world.”

Scandinavia’s combination of longer daylight hours and lower temperatures make for white and sparkling wines with “a really fresh, crisp acidity that is becoming harder and harder to achieve further south”, Svensson explains, where increasingly fierce summer highs greatly increase the sugar content in the ripening grapes. Early Scandinavian wine pioneers searched long for varieties that would suit this nascent Nordic terroir, and had to learn on the job how to turn them into something drinkable, said Murre Sofrakis, who first planted an experimental half-hectare of vines in his father’s market garden in Klagshamn, just outside Malmö, in 2001.

“Growing is one thing, but producing something decent is very much another,” Sofrakis says in the small but spotless winery of the Flädie vineyard, where – on top of the two hectares of his own that he now has under vine at Klagshamn – he looks after a further three for the estate’s owner. The grape variety most Swedish winemakers have settled on is solaris, a hardy hybrid developed from riesling and pinot gris, for their whites. Created in 1975 in Freiburg in southern Germany, the variety is “particularly suited to Scandinavian conditions”, Sofrakis says. “It just really seems to like it here. It’s our insurance policy: even in a bad year, it will make a good wine.” 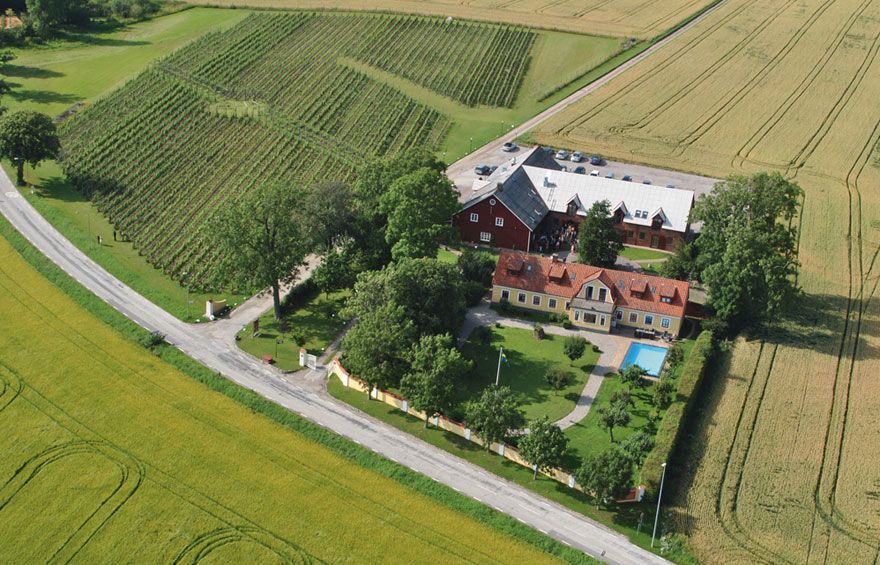 The most common variety for reds is rondo, created in 1964 by cross-breeding St Laurent, a classic grape more usually seen in the European Alps – although several growers, including Hansson, have now also begun successfully producing pinot noir. “Up here, it’s a constant and necessary process of trial and error,” Hansson explains. “Each year, we try something new in a small part of the vineyard. Sometimes it works, sometimes it doesn’t. We now know, for example, that merlot isn’t possible here. Very nice leaves, totally lousy grapes.”

One advantage that Scandinavia’s neophyte winemakers have over southern European producers is that their more recently developed grape varieties, grown in a cooler climate make for markedly more disease-resistant vines. “The wine industry, as a whole, uses a lot of chemicals,” says Sofrakis. “It’s common practice in France, for example, to spray your vines between fourteen and eighteen times. Here, I haven’t sprayed once in eighteen years.”

Hansson, along with several Swedish winemakers, now sells to top restaurants in Sweden as well as exporting to sommeliers and specialist wine merchants in cities such as Berlin, Amsterdam and Paris. But it has not always been easy. In the early days, he said, finding a customer was as hard as producing a good wine. Growing is one thing, but producing something decent is very much another. “Wine drinkers here were used to a big, classic, southern European flavour profile, which we obviously didn’t match,” he explains. But fifteen years on, says Mick Daly, an Australian former engineer who now works with Hansson, the fact that the wine is “the product of a terroir, of our specific climate and conditions in Skåne … it used to be a negative; it’s now a positive. We’re no longer just a novelty. People who used to take a glass now take a bottle.”

Cracking the Swedish retail market was doubly hard because low production volumes mean prices are necessarily high – typically 280-330 SEK (£23-28) a bottle – and, unlike in Denmark, only the state-run monopoly, Systembolaget, is allowed to sell alcohol. Winemakers cannot sell their product on-site or by mail order. But as the quality of Swedish wines has improved, more official stores have begun selling them. “The quality is really getting there,” says Joel, an assistant manager at Systembolaget’s central Malmö outlet, which now offers a dozen different Swedish white, sparkling, red and dessert wines. “There’s quite a buzz.”

At Bloom in the Park, his Michelin-starred restaurant overlooking the lake in the city’s Pildammarna park, Igi Vidal said he was “proud to introduce diners to Swedish wines as objectively fine as these”. Of the five glasses Vidal serves blind with his chef’s much-lauded five-course tasting menu, at least two will be Swedish. “Some early vintages,” he confesses, “I wouldn’t have brushed my teeth with. But over the last five years or so, the quality has soared. People who really know something about wine are gobsmacked. You give them a glass, they love it, then you tell them where it comes from they say, ‘You’re kidding. That’s from Sweden?’” 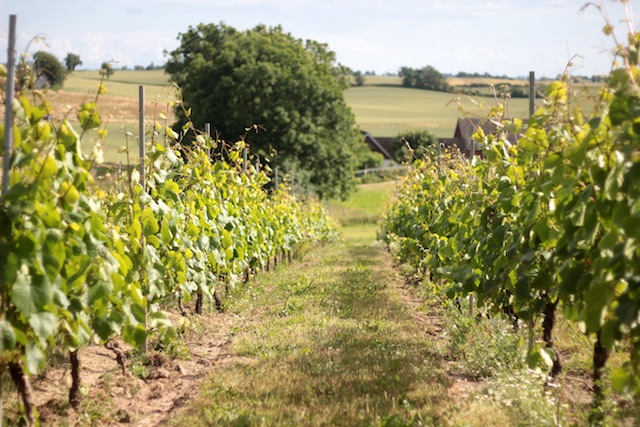 “Some early vintages I wouldn’t brush my teeth with. But over the last five years, the quality has soared.”

Vidal has a special fondness for the wines produced by Göran Amnegård of the Blaxsta estate near Stockholm, whose dessert ice wine – hailed as “glorious … a golden treasure” by the wine critic Jancis Robinson – first put Swedish wine on the map in 2007 when it collected a raft of international awards. “The guy’s a genius,” Vidal says appreciatively nursing a glass of Amnegård’s 2016 chardonnay. “Who would have thought someone would ever produce something like this in Sweden? Round, creamy, golden… Comparable to some of the world’s best.”

Scientists say the world’s wine map could be fundamentally changed by global heating, with traditional winemaking regions in southern Europe, as well as Australia, California and Latin America, becoming simply too hot while more northerly areas such as the UK, the Netherlands and Scandinavia boom. That does not mean northern vineyards will find life easy. Rising temperatures may have improved growing conditions, but global heating also means more extreme and unpredictable weather: heavy rain, violent storms and hail. “It’s not just an advantage,” says Hansson. “It’s a challenge, too. We will need to be very good growers.”

The challenges in southern Europe, however, look daunting. In Spain and Italy, winemakers are moving to higher altitudes and planting on north-facing slopes to prevent record temperatures ripening grapes too fast, boosting their sugar and alcohol content to unacceptable levels and irreversibly altering their flavour. In France, scientists at the Institut des Sciences de la Vigne et du Vin in Bordeaux are exploring how more heat- and drought-resistant grape varieties from countries such as Georgia, Portugal and Tunisia fare in south-west France against traditional Bordeaux varieties such as merlot, which is thought to be unlikely to survive the coming decades. Faced with global heating, producers in the chateaux of the Bordeaux region are hampered by strict rules governing how their wine must be made if it is to qualify for the Bordeaux appellation: irrigation is not allowed and a true Bordeaux wine can be made from just six authorised grape varieties. As irrigation is not seen as a sustainable option, producers voted unanimously last July to experiment with allowing up to 10 per cent of seven new grape types – including two from Portugal – in the final blend of certain Bordeaux categories in a historic effort to combat the effects of climate change while retaining the wine’s key characteristics.

Nordic growers, meanwhile, see mostly upside to the changes ahead. “Serious money” was now being invested in Swedish vineyards, Sofrakis says, the largest of which now have up to twenty hectares under vine. What was once a retirement hobby has become a career option: ambitious young Swedes are studying winemaking in France and California before returning to work in the industry at home.

“There’s a critical mass now, a momentum,” he explains. “We have the conditions to produce quality wines; there aren’t many places in the world like this. We’re winning prizes – and we’re still learning. I reckon it’s a thirty-year curve: ten years to indulge your passion, ten to gain experience, ten to professionalise. I’m very confident.”

This article was first published in The Guardian. It has been republished with permission of the author.