KRISTOFER HIVJU is fast becoming a global name. The Norwegian actor tells POLLY VERNON about his Beck and Game of Thrones stardom, and why even his beard has its own YouTube channel…

Of all the genres currently available, is any more suited to life in lockdown than ‘Nordic noir’? Sure, you could binge-rewatch The Wire, or escape into the nostalgic micro-crisis of Quiz… But nothing looks quite like isolation feels than ‘Nordic noir’. It’s nearly ten years since the UK first fell for Scandinavian telly. The Killing – everyone’s entrée – debuted on BBC Four in the earliest spring of 2011. In the course of its inaugural weekend, solemn, dogged Sarah Lund and her trend-establishing knitwear alerted us to the fact that this was the TV we’d been missing all our lives. The achingly slow burn, the sheer luxury, of Scandinavian storytelling, the cumulating insights into another culture’s inherent weirdness, the dark mood, the potent atmosphere, the low-key beauty of the interiors and epic drama of the exteriors, the subtitles keeping us undistracted by our phones… Nordic noir felt like a revelation.

Everything that came after served only to build on The Killing‘s impact. We watched them as quickly as the BBC and Channel 4 could acquire them. Then, with our sensibilities Nordically adjusted, we settled down in front of brand new British dramas such as Broadchurch and Marcella, which relied heavily and unashamedly on the Scandinavian approach. Even so, and that decade-long obsession notwithstanding, ‘Nordic noir’ has never made as much sense as it does now. The dark Scandinavian winters produce circumstances not unlike self-isolation. ‘Nordic noir’ resonates perfectly with the slow, foreboding pitch of our weird new world.

As Tormund Giantsbane in HBO’s Game of Thrones

Twin is its freshest offering. Showing on BBC Four, the show takes a traditionally comic Hollywood conceit – that of the identity swap – then comprehensively Nordics it up, tinting the comedy with bittersweet sorrow and gently yet thoroughly exploring complex family dynamics and the nature of love and deception. “Is it ‘Nordic noir’?” asks its star and co-creator, Kristofer Hivju, when he calls me from lockdown in Oslo. “You know? Because it has less crime than you’d think. For me, ‘Nordic noir’ is a what-if, a whodunnit in grey colours. A horrible, cruel crime, from some disturbed people! Twin is normal people who take one wrong choice. I’m gonna figure out a good name for it…”

“Nordic light? Nordic nouveau?” I begin, but he’s off and running on other subjects. He’s a bounding, rambunctious Viking of a bloke, even on the phone, a touch inclined towards thespy-style philosophising perhaps, but I’ve yet to interview an actor who isn’t. I’d like to think I would have got the impression I was speaking with a sort of Viking Father Christmas, or perhaps a Viking Brian Blessed, even if I hadn’t known exactly what Hivju looks like: strapping and ginger with a beard so compelling, energetic and rogue, it looks like it should have its own agent. Hivju runs a YouTube ‘beard school’ in its honour, which I’d tried to watch in preparation for our call, only it’s in Norwegian so I couldn’t understand a word. I later learn that his top tips for optimal beard growth include (but are not limited to) “drinking beer, eating meat and waiting four months and sixteen days.” 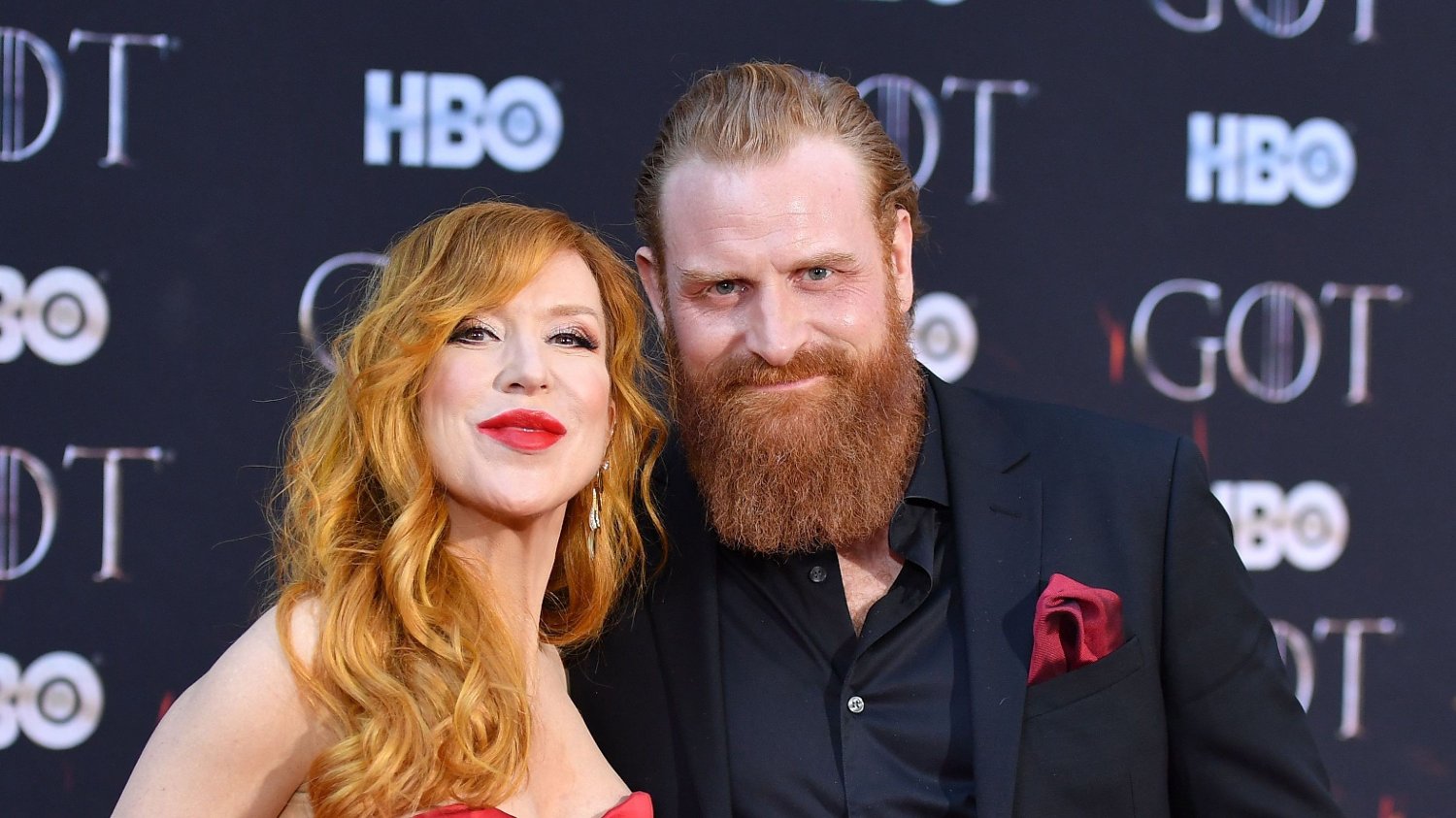 Back to Twin. Hivju plays them both: Erik, a blagger and surfer who has eschewed all traditional rites of passage, and Adam, Erik’s apparently straightlaced, grown-up twin brother. The two have been estranged for fifteen years, until an unlikely series of events leads to Adam’s manslaughter, and Erik taking his place in society and his home. It’s a dramatic premise that only works because it’s Scandinavian. I tell Hivju I’m enjoying it. “Fantastic!” he replies. “It has been a passion project for me for many years.” Hivju created Twin with his friend, the writer and director Kristoffer Metcalfe. “We consider it our baby. It’s thirteen years since we got the idea. First, you fall in love with the idea; then, through those years, we have met our spouses, we have got kids, we have grown as human beings. So the idea has changed lots. It started out as a western set in the 18th century, and ended up in modern times as a much more melancholic piece.”

If you haven’t yet seen Hivju in Twin, you might know him from Beck, also shown on BBC Four, in which he plays homicide investigator Steinar Hovland. Or perhaps as Connor Rhodes in the eighth installment of Fast & Furious. And if you don’t know him from that, there’s a fairly big chance you’ll know him as Tormund Giantsbane in Game of Thrones, the raucous, savage fighter who falls hopelessly in love with Brienne of Tarth. Point is, Hivju is a consistently employed actor of rising repute.

Hivju was born into a family of actors. His parents, Erik Hivju and Lieselotte Holmene, were actors, as was his grandmother. Hivju, however, says acting was Plan B. “My plan was to be a rock star,” he admits. “I had a group, and we were about to sign… But then, you know, something happens, and I found out I was more talented in this craft I’d tried to avoid. I was born into a world of actors. My grandmother, my parents, many of my parents’ friends. Acting didn’t come from, ‘I want to live their life’ because I’ve seen everything, you know? The peak points, the low points, the struggles. For me, it’s not like a glamorous, fantastic thing. Everyone was an actor! But I went to a music school, and for some reason, we had to stage Hamlet, and I was cast as Hamlet, and suddenly, somewhere in the ‘To be, or not to be’ monologue, I understood it is for me. It was quite religious.” I ask him if he expected to be famous. “Uh… I wanted to be! Yeah. I get a kick out of attention… But fame is not a thing. It’s a circumstance. People come up to me and say they’re enjoying things I made. I go to China, I go to New Zealand, and people know who I am, and it’s a bit strange actually. Fame lasts for fifteen months. For fifteen months, you think it’s awesome. After that, it becomes a part of reality. A circumstance in your life that you have to be aware of.”

Hivju is currently writing two new shows, which he can’t tell me about, except “one’s a comedy”, and he doesn’t know if there will be a second series of Twin, though he wrote it for one series. Just before he says goodbye, I  catch him with an awkward question. I can’t help but notice he’s often naked in Twin… “Yeah, yeah!” he laughs. “The circumstances demanded it, ha ha!” Might one assume therefore, that, given he served as co-creator, he has no objections to his on-screen nudity? “Ahhhh… No! Ha ha!” he says. And I hang up.

KRISTOFER HIVJU stars in Twin. All episodes are available now on BBC iPlayer.

POLLY VERNON is Grazia‘s Editor at Large and writes for The Times.