The number of people sleeping rough in the UK has multiplied since 2010. But in Finland’s capital Helsinki rough sleeping has been almost eradicated thanks to a groundbreaking scheme. What can cities in the UK learn from the Finns? MATT TREWAN finds out…

Emerging from Helsinki’s grandiose central railway station on a bitterly cold evening, it does not take long before you notice something unusual. There are no rough sleepers and no-one is begging.

“In my childhood I remember there were hundreds, or even thousands of people sleeping in the parks and forests,” says Helsinki’s deputy mayor Sanna Vesikansa. “It was visible, but we don’t have it any more. Homelessness doesn’t exist in Helsinki.”

For the past thirty years, tackling homelessness has been a focus for successive governments in Finland. In 1987, there were more than eighteen thousand homeless people there. The latest figures from the end of 2017 show there were about 6,600 people classified as without a home. The vast majority are living with friends or family, or are housed in temporary accommodation. Only a very small number are actually sleeping on the streets.

So how have the Finns managed it?

Since 2007, their government has built homeless policies on the foundations of the ‘Housing First’ principle. Put simply, it gives rough sleepers or people who become homeless a stable and permanent home of their own as soon as possible. It then provides them with the help and support they need. That may be supporting someone trying to tackle an addiction, assisting them to learn new skills, or helping them get into training, education or work. This is very different to the traditional approach in the UK, where a permanent home is only offered after a homeless person has sought help in a homeless hostel or temporary accommodation. 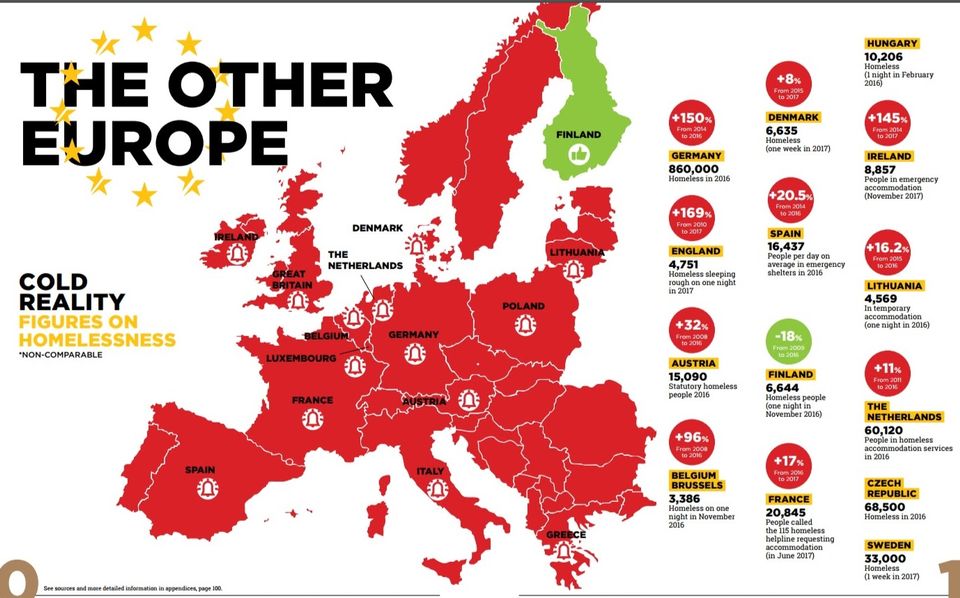 One person who has benefited is Thomas Salmi, who became homeless when he turned 18 and had to leave his orphanage. He spent three years on the streets of Helsinki, where the average minimum temperature in February is -7C.

“When you lose everything, it really doesn’t matter,” he says. “You’re thinking about suicide, am I going to die? Is it safe? It is cold, especially in the middle of winter. If you’re sleeping outside you might die.”

For the past two years, Thomas has had an apartment of his own at a large complex run by the Helsinki Deaconless Index (HDI), one of several organisations providing accommodation for otherwise homeless Finns. Now twenty four, he says living at the HDI has helped him turn his life around. He used to drink heavily while living on the streets but now only touches alcohol at the weekend.

Under ‘Housing First’, the offer of a home is unconditional. Even if someone is still taking drugs or abusing alcohol they still get to stay in the house or flat, so long as they are interacting with support workers. They can pay rent through state housing benefit and people can even opt to stay for the rest of their lives.

“They told me that it’s my house,” says Thomas, “and I asked them – is someone going to tell me, ‘we need this house and you have to go’? But they told me ‘No, it’s your house, you can do whatever you want.’ When I have a stable home, I can try to build everything else around it like work, studying, family, friends. But when you’re on the streets, you don’t have any of that.”

HDI has a total of 403 apartments in Helsinki and the neighbouring city of Espoo. Tenants get together in the communal kitchen to make lunch and socialise in the lounge areas and support workers are always on hand. 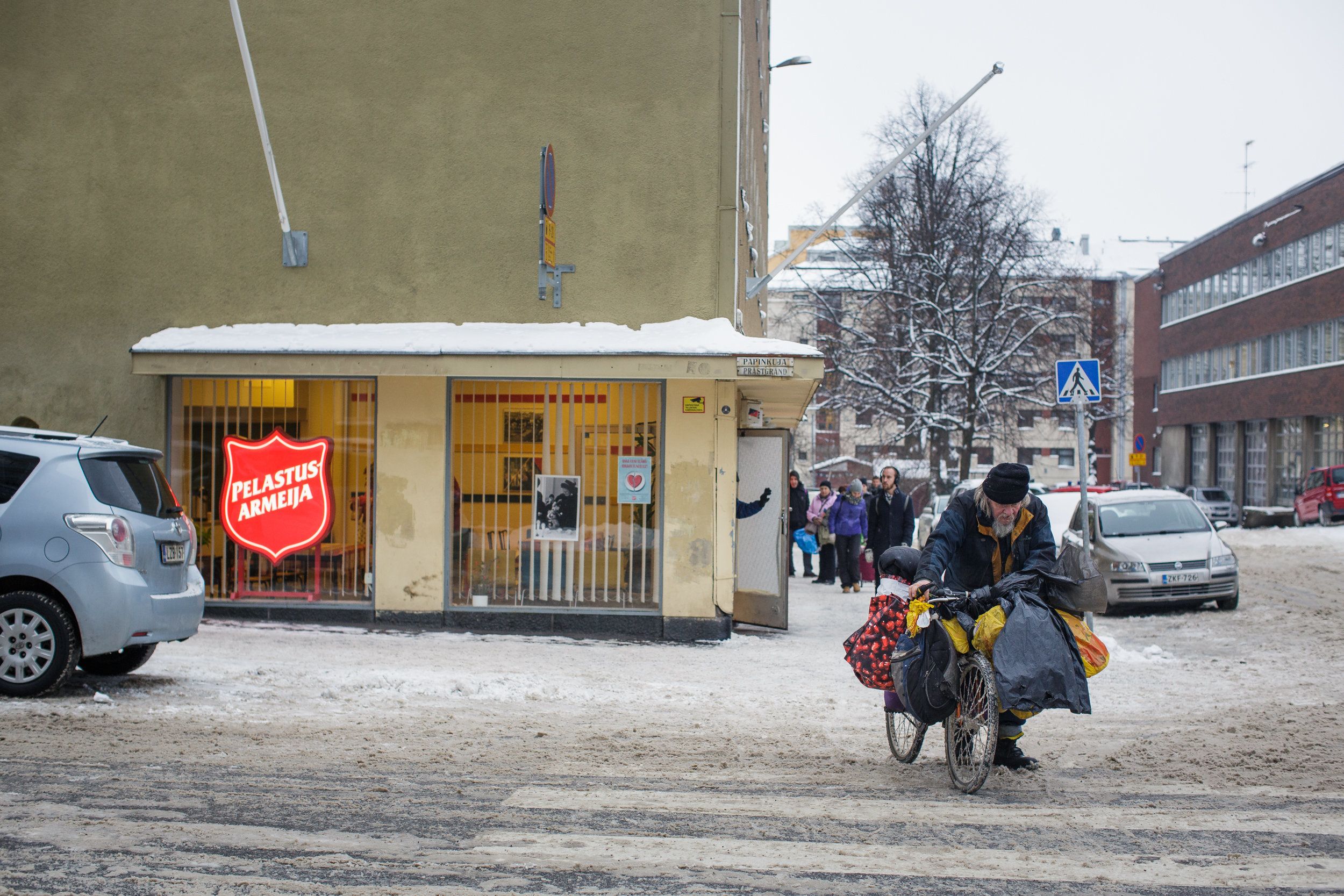 “HDI has a total of 403 apartments in Helsinki and the neighbouring city of Espoo. Tenants get together in the communal kitchen to make lunch and socialise in the lounge areas and support workers are always on hand.”

Pia Rosenberg has lived in the same ‘Housing First’ project since 2014 after being homeless for two years.

“It suits me good because I’m an alcoholic and I’m allowed to drink in my room,” she says. “And if I need help, then I get it. You don’t feel good if you don’t have a home.”

‘Housing First”s success has caught the attention of the British government, which last year agreed to pay for pilot schemes in Greater Manchester, Merseyside and the West Midlands. There are already several small scale trials being carried out in Wales, some run by The Salvation Army, others by local authorities. Those behind the schemes say the results so far have been positive. Trials in England are due to start shortly and will be aimed at helping the most entrenched rough sleepers.

But is it a good idea to essentially hand over the keys to accommodation, without any obligation to give up alcohol or drugs?

“We can see that it works in Finland, so why can’t it work here,” says Neil Cornthwaite, head of operations at the homeless charity Barnabus Manchester. “There are a lot of barriers to people getting into accommodation and certain groups of people are excluded from projects because of their addictions and/or their mental health. So if we’ve got another option where we can put people into a home and not just a bed, despite their issues, then I think that’s a really positive step forward.”

While the scheme is regarded as successful in Finland, it does have drawbacks. Homes are not always available immediately and figures show roughly one in five people return to homelessness at some stage. Housing people in this way does not come cheap. Finland has spent about €295m (£262m) over the past decade, providing 3,500 new homes for the homeless and more than three hundred new support workers.

The UK government is spending £28m on three ‘Housing First’ schemes and hopes about 1,000 homes will be provided. One of the key architects of ‘Housing First’ in Finland, Juha Kaakinen, believes it will only work if the UK authorities are fully committed.

“In many places, ‘Housing First’ are small projects with a small number of flats available. You need to make it much bigger to end homelessness and for that reason it should be a national policy otherwise it won’t work. The main issue seems to be the lack of affordable social housing. To solve homelessness, that’s something that you need otherwise it’s going to be a very difficult task.”

Greater Manchester Mayor Andy Burnham is convinced the scheme is the right answer though.

“You cannot have good health or a good life without good housing,” he says. “I’m confident we will show that Housing First can work. I will be asking the government to make this permanent.”

Minister for Housing and Homelessness, Heather Wheeler, insists the government is listening and taking action.

“No-one is meant to spend their lives on the streets,” she says, “or without a home to call their own. And evidence shows that ‘Housing First’ has an incredible rate of success in helping people rebuild their lives.”

Back in Helsinki, deputy mayor Vesikansa believes tackling homelessness and ending rough sleeping is not only a moral obligation but may also save money in the long-run.

“We know already that it pays back because we have expenses elsewhere if people are homeless,” she explains, “they have more severe health problems which are then taken to emergency care and hospital. Homelessness and rough sleeping is something we just can’t have in our cities, people dying on the streets. It’s not the type of society or city we want to live in.”

MATT TREWAN is a journalist at BBC Radio Manchester.

This article has also been published in the BBC.