This year might be different, but Spring in Sweden is usually a time for celebration. Last year, ALISON ALLFREY took a trip through the Stockholm Archipelago to discover the flowers of Ängsö…

Spring is like a flash of mercury in Sweden. Blink and you’ll miss it. There’s no equivocal dividing up of the year into four seasons this far north. It’s mostly about an extremely prolonged winter – this one excepted – and an idyllic summer of endless days. Spring is the glorious eruption in between.

Further south nature is kinder, the climate more forgiving. But in Sweden plants have humility and know they cannot grapple with the elements until the usual snow has finally gone. So the days stretch on through January, February, March until finally, perhaps late in April, the first flower finally emerges. It’s as if God has woken after a deep slumber. There’s hope, colour, new energy. Quite suddenly, previously bare forest floors are carpeted with anemones white or blue. They dance in the wind as if to say, ‘we’ve survived,’ as the colour spectrum finally has some contrast after endless months of uniform evergreen. Into the cocktail come vivid yellow primula on ancient seeming meadows, their dainty heads gleaming in the sun, their number overwhelming. Like entrances from a botanical orchestra, next come those rarest of plants, orchids, here in deep majestic purple and primrose yellow, his Adam to her Eve.

The most entrancing place to see these is Europe’s first national park, the most unassuming and faraway of islands in Stockholm’s exquisite archipelago. This requires quite some pilgrimage, but every minute is worth it, for Ängsö is out of this world. Our approach is somewhat fraught, as despite the departure point being the smallest ‘port’ we have ever seen, consisting of one rarely used bus stop and the quietest of quiet Swedish playgrounds, we manage almost to miss the only ferry that morning. This owing to a failure to grasp that the one lonely semaphore perched by the water should be raised if the ferry is to stop there for passengers. Frantic arm waving suffices as we manage to reverse the ferry’s inexorable progress along the shoreline and away from us. This drama thankfully behind us, we succumb to the glorious glimmer of the water, the shy spring sunshine and the timelessness of the endless succession of small, unsuspecting islands each replete with trees aplenty, the odd much-loved fishing or small motorboat, and idyllic houses. This is simplicity personified and the greatest tonic imaginable. Swedes are extraordinarily self-sufficient people, with steadfast determination and can-do attitude inscribed in their hearts, but even in one of the emptiest countries in Europe, that heart’s desire is to get away from it all. And the archipelago is one place to do just that. 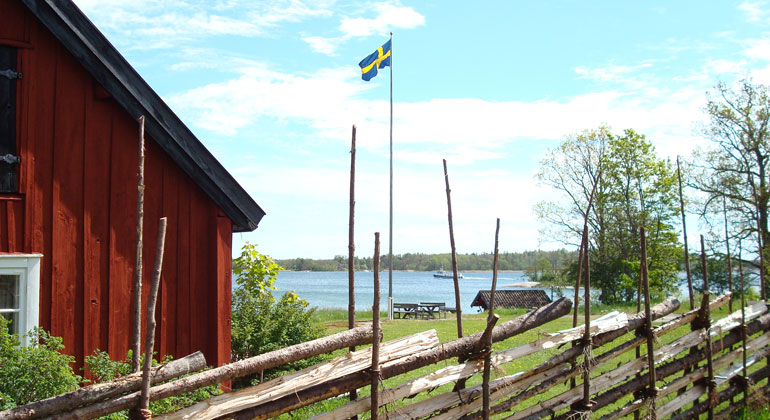 “Even in one of the emptiest countries in Europe, the heart’s desire is to get away from it all. And the archipelago is one place to do that.”

We bob along the water, the gentle waves undulating in soporific fashion until the small ferry decelerates and a tiny wooden jetty hoves into view. We have arrived! Our first step onto Ängsö is like a step back in time, as our eyes take in the ancient coppice fencing and fields of ages past. We lose our eyes at the myriad of flowers bobbing in the breeze, as innocent as a young bride and plentiful as bounty. Nature has caught us in her embrace, as is so often the case in Sweden. At a time where the environment remains foremost in our global consciousness, it’s clear that the Swedes have the secret. For them, nature is simply the most important priority in their lives and their country the most cherished and precious thing of all. They do have the advantage of untold space – time to breathe, time to exercise, time to protect – but they do all these things as if by second nature. And the result is spectacular.

Who would not want to disappear on one of the sailing boats moored up to a granite promontory, to submit to the rhythm of the water in its brackish gentleness? Who would not be seduced by evening bike rides along the water, the air heady with the gorgeous scent of roses or sweet lilac flowering in gay abandon? Who would not fish to their heart’s content on a lonely beach as the sun goes down over a distant white church, the sky awash with gleaming, fabulous colour?

Sweden has all this and spring is the sweetest time to taste it. This year summer may be the more possible option, by which time the light will be of phenomenal clarity, the air exhilarating and the water irresistible. What better way to reawaken and revive after months of uncertainty and isolation? Sweden’s flavour of isolation spells magic and rejuvenation – the unbridled call of nature.

ALISON ALLFREY is the author of So Sweden: Living Differently, available to buy now on Amazon.

One thought on “The Drama of Spring”