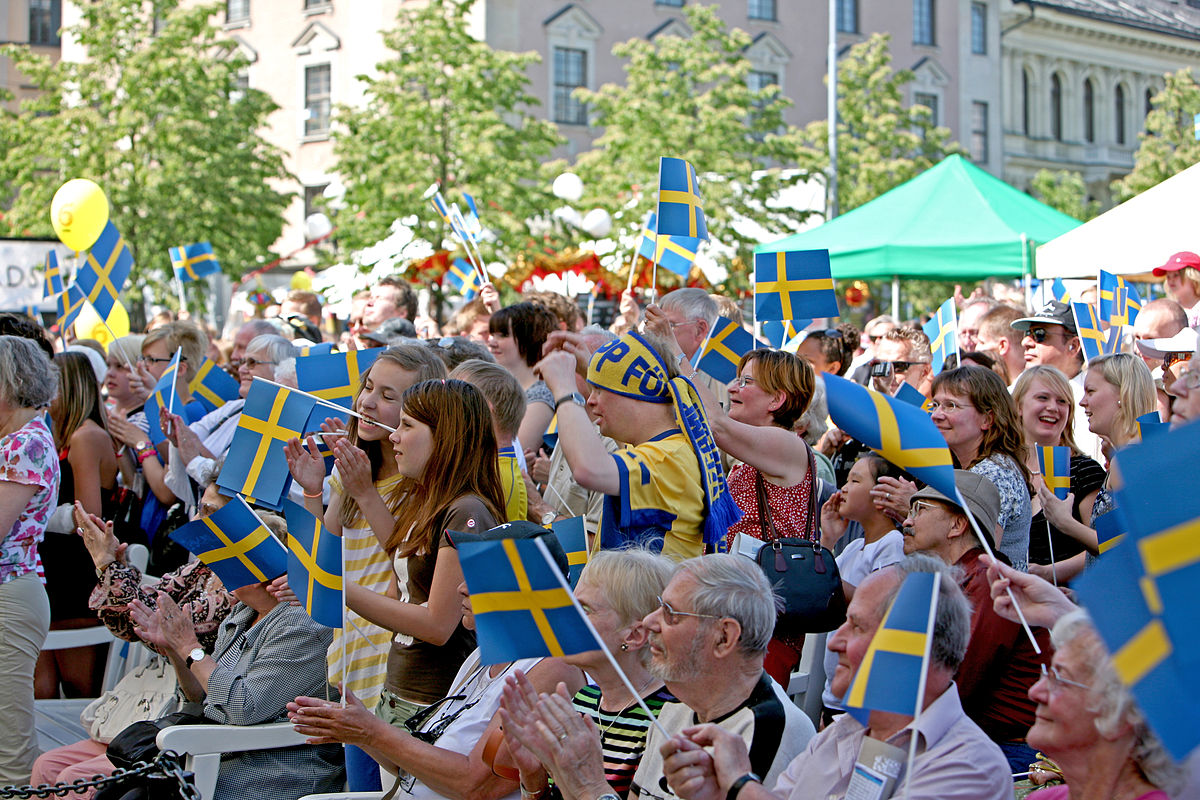 Unlike Danish celebrations the day before, Swedes celebrate their national day with fervour. Though perhaps not as much as the Norwegians! Every year, the King and Queen of Sweden take part in a ceremony at Skansen, Stockholm’s open-air museum, where Swedish flags are run up the poles, and children in traditional costume present the royal couple with bouquets of summer flowers. 6th June was chosen as a day of celebration around 1900, when national-romantic winds were blowing through the country and folklore societies and local history museums were established.

In 2004, the Swedish parliament voted to make it a public holiday. But this final date decision took decades to reach − various proposals had been discussed under a succession of governments. There are still groups lobbying for the introduction of an official national pastry, and a national dish, and for the key-fiddle (nyckelharpa) to be made the national instrument. But, even for these ideas, arriving at a consensus has proved difficult.

A sea of well-wishers stretching down Karl Johans gate. A rousing three cheers for the royal family. Every 17th May, the streets of Oslo fill with children and marching bands. They, and their counterparts across the country, celebrate Norwegian National Day: which is, after Bastille Day, surely the largest national event held annually. On 6th June, though, I step of the train not in Oslo, but in Stockholm. It’s Swedish National Day: back to its usual, well-refined programme this year. On its return, I’ve been invited to share in the festivities. This has been a ‘red letter day’ since 2005, and the bank holiday has seen the creation of a mini 17th May spin-off. Taking breakfast in the Grand Hotel, as the flags are hoisted at 8am sharp, I overhear more from a fellow diner (she’s American, but a fountain of knowledge… who knew, for example, that Sweden has the highest per capita ratio of McDonalds outlets in Europe?). She tells me (or, rather, her husband), the day marks the election of King Gustaf Vasa on 6th June 1523… a date widely considered to be the start of modern Swedish history. This year, the King and Queen will visit Olofström in Bleckinge, before travelling back to the capital for the evening ceremonies.

At 10am, in the courtyard of the royal palace, a guard of honour (which includes Prince Carl Philip in their ranks) has gathered to greet the Crown Couple. With the third in line, Princess Estelle, and her brother (the 6-year-old Prince Oscar), they’ve come open the palace, removing its usual entry fee in a long-established national day tradition. Making a short, off the cuff speech, the Crown Princess (decked, like Estelle, in her national costume) says she hopes we’ll enjoy discovering the palace’s history… a short while later, stepping into her car, which parts the gatherings of mingling visitors, she waves and wishes us a ‘fin dag’, just as the hoards begin parading her property. And parading – or, perhaps, invading – it is. In the palace’s inner courtyard, marching bands and produce tents create a festival atmosphere. We peer through windows of the usually unseen royal cars, then trample past the private apartments, right over what will later hold the military ‘tapto’ parade. Reclaiming the building Yanukovych-like, you’d have thought we’d just booted out the Crown Princess, rather than accepting her invitation to fill our boots.

I cross over to the Gärdet park for champagne, lunch, and the afternoon’s entertainment. The Nationaldagsgaloppen couldn’t be more Swedish. A line of thousands descend on an IKEA-style flat-pack racecourse, complete with a tented grandstand, paddock, screen and circular, fully railed track. The stalls have been lifted in from Bro Park racecourse (the home of Scandinavian racing, about 40 km north of Stockholm), and the officials who’ve invited me say the challenge is to get this crowd of 40,000 (and more watching live on national television) to the regular meetings there, and in Strömsholm, Malmö and Gothenburg. In a flurry of excitement, a card of five races whiz past: all under the rules and requirements of a permanent facility, and with the country’s top jockeys onboard. I’m spat back out, passing cars, buses and trains with flags firmly attached by the city council, to head over to Djurgården, and the centrepiece of the day’s celebrations. The ceremony at the Skansen open air museum is broadcast on SVT at 8pm, and the steadicam rushing to and fro speaks of its energy. Unlike Norway’s national day, this is a television spectacle, and before the show, I catch a word with the heavily made-up Anne Lundberg, one of the ceremony’s two presenters (who I interviewed last year on The Nordic Podcast).

As the atmosphere builds, the prime minister pulls up, handed a programme and flag, her hair adjusted by an aide. The Speaker of Parliament continues his reception committee on the other side of the stage, decked out in blue and white. I hang back as an overhead drone gets steadily closer, tracking the open carriage royal procession as it passes through lined streets up from the palace. A flag-tailing helicopter flies by, the King and his family step out to the royal anthem, and I take my seat. I’ve been given a front row chair, just to the left of the royal family, and watch as officials speak and singers including Theoz, Gunilla Backman and Tommy Körborg head on stage to perform, finishing up with the ‘passing of the banners’, three cheers and the national anthem. Following the motorcade back to the palace, I wait as the broadcast catches up to real time, and the royal family descend to the water facing courtyard for a short display of marching drums. As the credits roll, a line of diplomatic cars takes the invited dignitaries and royal family home. On the other side of the palace, where I started the day, a guard of honour changes and thanks soldiers and the public for a special service. They wind up the day, heading back to barracks. And I too, all done, head south.

Extracts of this article have also been published in Nordic Style Magazine.