Back in February, climate activist GRETA THUNBERG visited the UK, rallying the people of Bristol in a giant demonstration…

It’s 10am, and turning onto Whiteladies Road, it’s clear that the whole city is heading in one direction. A Mexican wave of raincoats, umbrellas and placards are making their way down the hill to College Green. In front of City Hall, a small podium has been put up overnight, and a string of young, nervous campaigners climb it to address the crowd. Reporters give their pieces to camera; radio crews scour the crowd. As a police escort arrives, the crowd pushes forward. Greta Thunberg, a guiding light for millions, emerges from a hideout in the cathedral, avoiding eye-contact with swarming reporters as she makes her way to the podium.

The speech lasts just six minutes, and it is not revolutionary, though Thunberg takes care to mention local issues. Rather, it is her presence that is so inspiring. Disembarking the platform, she walks, hands grasped to a ‘Skolstrejk för Klimatet’ banner, slowly, stoically, on a loop through the city centre. The shops around are empty. Office workers emerge on balconies, men in suits wave from their windows, youths in tracksuits climb atop bus stations. They shout, and Greta, unfazed, waves back. We are all, young and old, captivated by a tiny girl in a yellow mac and bobble hat. 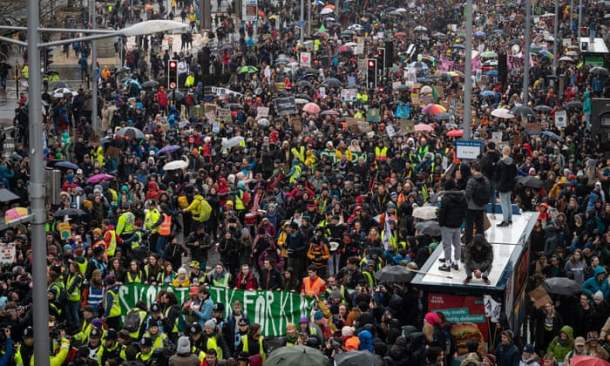 How is it, we wonder, that such a physically small figure has inspired such an enormous global movement? Her friendship with David Attenborough unites the generations; her public speaking has struck fear into the US President. That this young girl with Asperger’s from Stockholm has brought, in just one week, over 20,000 people onto the streets is a feat in itself. That this is repeated in other European cities is very moving.

As Thunberg boards a train back to London, the city is left in a strange sense of calm. People who have travelled from Birmingham, Edinburgh and Liverpool head home. It is as if, when Greta leaves, the drive leaves too. But though all that remains to the eye are trampled banners and mud, the ideas she preached remain too. The girl in the yellow mac really is an unstoppable force.

This article has also been published in Scan Magazine and Burst Radio.