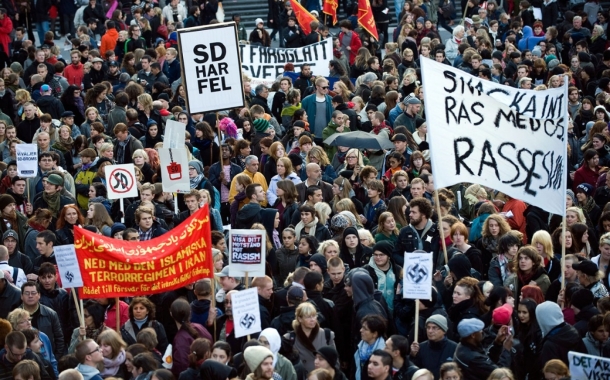 With UKIP all but wiped out last Thursday, worries about the rise of Britain’s far-right have been dispelled. In Scandinavia, though, the problem shows no sign of going away…

The UK’s snap election last Thursday saw UKIP all but wiped out, with no seats in Parliament and a decline of 10.8 per cent in the popular vote. Their leader, Paul Nuttall, promptly resigned. Elsewhere in Europe, populist leader Geert Wilders failed to enter mainstream Dutch politics during an election last April and France’s Marine Le Pen gained less than 35 per cent in the second round of their presidential election. In Scandinavia, though, the threat of a far-right uprisings show no sign of going away. While the shock victory of Donald Trump can be blamed on inherent American inequality, it is hard to explain the ever-increasing appeal of anti- modernist parties in a region home to some of the happiest and most egalitarian nations on Earth.

The Fremskrittspartiet (Freedom Party) entered Norway’s government after the 2013 general election. Unlike the Dansk Folkeparti (Danish People’s Party) and Sverigedemokraterna (Sweden Democrats), the Freedom Party has often been described not as extreme-right, but neo-liberal. Members of the centrist parties, even centre-right prime minister Erna Solberg, have been quick to disperse claims they are in league with foreign anti-immigrant parties. But Anders Breivik’s sickening actions in 2011 brought a dark web of hard-line racism irreversibly to the surface. Breivik doubled his country’s annual homicide rate in one day, killing eight people in a car bomb attack near the prime minister’s office in Oslo and shooting a further sixty nine at a youth event on the island of Utøya. While, after the attack, then prime minister Jens Stoltenberg called for unity and openness, when many others in his position may have called for all-out war, the fabric of Norwegian society is still recovering from the exposure of Breivik’s manifesto and its terrifying number of followers. One of the worst anti-Islamic websites, ‘SIAN’ (‘Stopp Islamiseringen av Norge’), claimed to have over 10,000 followers.

“The fabric of Norwegian society is still recovering from the exposure of Breivik’s manifesto and its terrifying number of followers. One of the worst anti-Islamic websites, ‘SIAN’ (‘Stopp Islamiseringen av Norge’), claimed to have over 10,000 followers.”

In 1990 the ‘European Values Study’ canvassed 16,000 people in sixteen countries with the choice of ‘agree’ or ‘disagree’ to the statement: ‘I don’t like to be with people who are different from me in terms of their opinions, values, and so on’. 43 per cent of Swedes agreed, an astonishing response when compared to the 10 per cent that agreed in other Nordic countries. In fact the designers were so sure that there had been some statistical error that they repeated the experiment, but again 41 per cent of people agreed. In 2015 alone Sweden accepted over 160,000 asylum seekers to a population of just under ten million (before 2015 the average had been stable at around 100,000 a year). As of March 2017, 23.9 per cent of people would vote for the Sweden Democrats, doubling their results from the 2014 election and making them Sweden’s second largest party. The Sweden Democrats were founded in 1988 from the Sweden Party, which had its roots in Swedish Fascism and white supremacy. The new party continued to use its old slogan, ‘Bevara Sverige Svenskt’ (‘Keep Sweden Swedish’), and adopted the torch of Britain’s Fascist party, the National Front, as its logo. This continued virtually unhindered until 2006, a year after their current leader, Jimmie Åkesson, and his relatively moderate ‘gang of four’ took up the reins. Mikael Jansson, in the 1990s, attempted to disperse some of its Fascist imagery, banning the wearing of Nazi costumes and expelling some the party’s more radical members. But however hard the Sweden Democrats tried to distance themselves from their Nazi heritage, until the last election the Sweden Democrats were even denied advertisements in newspapers and refused interviews on public television as they were too extreme.

The Danish People’s Party (DPP) is the most recent of Scandinavia’s far-right parties, founded in 1995 by Pia Kjærsgaard, who led the party until 2012 when she passed the baton to its current leader, Kristian Thulesen Dahl. Unlike the Sweden Democrats, who received virtually no attention for around twenty five years, the DPP entered the political scene only seven years after their foundation, lending support to the Liberal-Conservative coalition that formed after the 2001 election. Like the Sweden Democrats, the DPP is fundamentally anti-Islamist. Kjæsgaard was known to spout such phrases as “there’s only one civilisation and it’s ours” and “Muslims cheat, lie and deceive”. She still talks frequently of ‘de mørke’ (‘the dark people’). Like their Swedish neighbours, the DPP have also seen an incredible rise in their popularity over the last five years, increasing from around 12 per cent of the vote in 2011 to becoming Denmark’s second largest party in the 2015 election, where they grossed almost 21 per cent of the vote.