As the UK’s leading expert in crime fiction, BARRY FORSHAW is perfectly placed to discuss the rise of ‘Nordic noir’, and how it will remain enduring for Brits for years to come…

“When I was a boy,” Barry Forshaw tells me, “I remember reading both The Big Sleep by R.T. Chandler and The Time Machine by H.G. Wells. I enjoyed both, but I there was an instant predilection for crime fiction.” Forshaw has clearly always been obsessed with crime writing. To engage with his interest, he decided to embark on a career in literary criticism, assuming his passion for crime fiction would be taken seriously. “The first books I reviewed were in the general literary field,” Forshaw explains, “and it took time for my editors to realise I had an enthusiasm for crime fiction.”

Once they realised, however, it did not take long for him to reach his current position, occupying the mantle of Britain’s leading voice on crime fiction. “It was something I was happy to take on,” says Forshaw, “though keeping up with new entries is often a challenge.” He now reviews crime fiction for various newspapers, including The Times, The Telegraph and The Guardian and is a pundit on crime fiction for both the BBC and ITV. He is also the editor of Crime Time, and a former vice chair of the Crime Writers’ Association, alongside writing numerous books. Given the unstoppable rise of ‘Nordic noir’, ‘Tartan noir’, ‘Gallic noir’ and ‘Mediterranean noir’, Forshaw’s pedestal now seems stable. But, back when his career began, crime fiction in Britain was a relatively niche market. Native authors such as Val McDermid, Lee Child and Ian Rankin were beginning to make waves, and American crime fiction was selling fast but, though it had been translated, the works of Scandinavian authors such as Maj Sjöwall, Per Wahlöö and Henning Mankell, were still relatively unknown.

“Sjöwall, Wahlöö and Mankell were all highly accomplished practitioners of crime fiction, and very well-respected across Europe,” Forshaw explains, “but there were distinguished as much by their markedly left-wing perspective as by the fact they were from a Nordic country. They merely coexisted among such foreign masters as Georges Simenon and Andrea Camilleri, and were certainly not part of a clearly defined ‘Scandinavian wave’.” With hindsight, of course, it is clear these authors were laying the ground for the ‘Nordic noir’ explosion that was to detonate with Stieg Larsson’s 2005 thriller The Girl with the Dragon Tattoo (Män som hatar kvinnor). That novel, published almost a year after Larsson died, was an instant phenomenon in Sweden, and it was the hysteria it generated that brought Scandinavian crime fiction to Britain for the first time. “When I was asked to write a biography of Larsson,” Forshaw says, “I knew I was looking at the start of ‘Nordic noir’ in the UK.”

“When I was asked to write a biography of Larsson, I knew I was looking at the start of ‘Nordic noir’ in the UK.”

A Timeshift documentary on the genre, Nordic Noir: The Story of Scandinavian Crime Fiction, was broadcast on BBC Four that December and soon after a Saturday night foreign drama slot had been established. The following January BBC Four broadcast The Killing (Forbydelsen); the following year it aired The Bridge (Bron / Broen) on BBC Two; then, in quick succession, it showed Borgen, Beck, Wallander, The Legacy (Arvingerne), 1864, Crimes of Passion (Mördaren ljuger inte ensam), Arne Dahl, Modus, Trapped (Ófærð), Follow the Money (Bedrag) and Below the Surface (Gidseltagningen). The second series of Black Lake (Svartsjön) began on BBC Four last Saturday. In 2016 Channel 4 cashed in on the appeal by launching Walter Presents, a free on-demand service made up entirely of foreign drama series. Add to this the bestselling books of Norwegian authors Jo Nesbø, Karin Fossum and Anne Holt, Swedish authors Camilla Läckberg and Håkan Nesser, as well as continued interest in such authors as Arnaldur Indriðason, Peter Høeg, and Per Pettersen, and it is clear the British obsession with ‘Nordic noir’ is here to stay.

Of course not all of the Scandinavian works Brits watch and read can be classified as ‘Nordic noir’ but, Forshaw tells me, they have all been influenced by the genre. “When I was writing one of my books,” he explains, “I asked the creator of Borgen, Adam Price, if he minded the show being lumped together with crime thrillers. He said he did not, as Borgen was part of a wave of interest in all things Scandinavian. There is definitely something about the show that links it to ‘Nordic noir’ thrillers. Prime Minister Nyborg is, for example, given a problem to solve most episodes, sometimes in which even lives are at stake.”

A strong sense of female empowerment is also something Borgen shares with its ‘Nordic noir’ contemporaries, and Birgitte Nyborg closely resembles such characters as Sara Lund in The Killing and Saga Norén in The Bridge. The appeal of ‘Nordic noir’ in Britain grew alongside an interest in Scandinavian cuisine, interior design and the concepts of hygge, fika and lagom, now almost integral words of the English language. Brits are fascinated with the paradox between an abundance of crime fiction and the social structure of nations that constantly top the world rankings for happiness and trust. 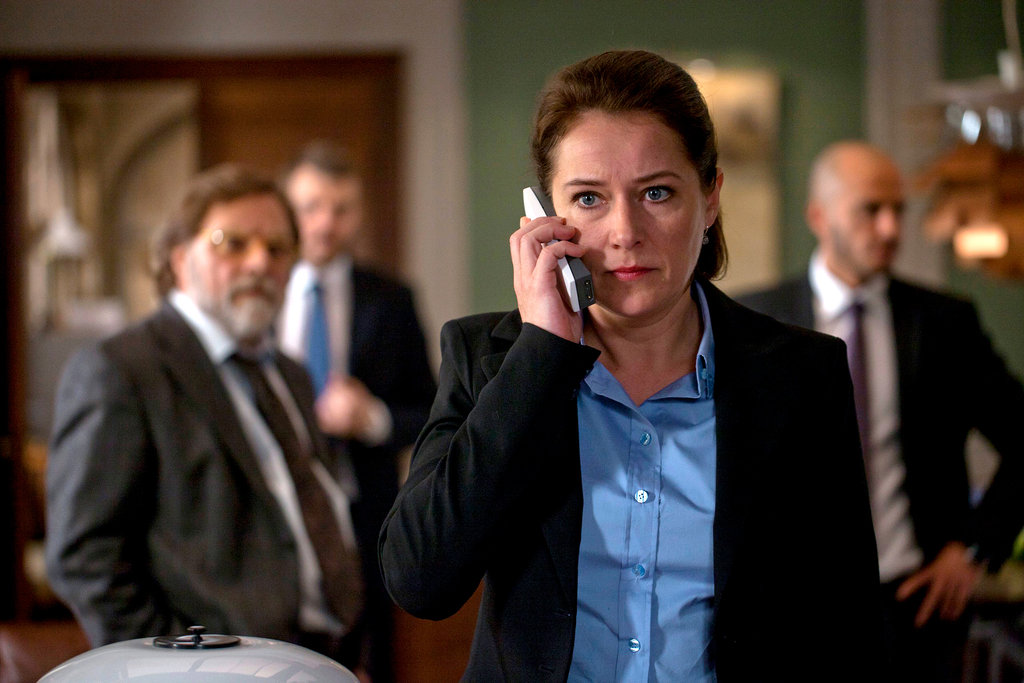 “There is definitely something about Borgen that links it to ‘Nordic noir’ thrillers. Prime Minister Nyborg is, for example, given a problem to solve most episodes, sometimes in which even lives are at stake.”

But, I ask Forshaw, is it only the British who have been left so flummoxed by this juxtaposition? “Britain leads the world in appreciation for ‘Nordic noir’,” he replies, and points out that while most northern European countries enjoy doses of Nordic crime fiction, many are put off by the need to dub foreign-language drama. When the American director David Fincher was asked why he was filming his 2011 adaptation of The Girl with the Dragon Tattoo in English, he said that it was because Americans dislike relying on subtitles. “The Brits, of course, once had a similar resistance,” Forshaw admits, “but we’ve grown so used to subtitles we do not notice them anymore.”

‘Nordic noir’ has become a staple of Saturday night television, and an inspiration for home-grown work such as the books of Ann Cleves, the BBC series Shetland and ITV’s Broadchurch; both of which, Forshaw says, have the atmospheric feel of a ‘Nordic noir’ drama, even if they are filmed in the UK.

There have been constant challenges to the popularity of ‘Nordic noir’, most notably in movements from Scotland. The so-called ‘Tartan noir’ of Rankin, McDermid and William McIlvanney for example, and the ‘Gallic noir’ of Spiral (Engrenages), Witnesses (Les Témoins) and a 2013 remake of The Bridge, The Tunnel (Tunnel), all of which aired on British television alongside shows from Scandinavia. Most recently, British viewers have been intrigued by drama of the ‘Mediterranean noir’ wave, with Italian series such as Inspector Montalbano (Il commissario Montalbano), The Young Montalbano (Il giovane Montalbano), Inspector De Luca (Il commissario De Luca) and Maltese (Maltese – Il romanzo del Commissario), but none have so far dented the Scandinaivan obsession. “Italy,” explains Forshaw, “with its endemic political corruption, not least the ever-present impact of the Mafia, is fertile territory for crime writers, and enthusiasm for ‘Mediterranean noir’ is rapidly increasing, with readers enjoying the direct political insights of Camilleri, Leonardo Sciascia and Carlo Lucarelli.”

But when I ask him if the popularity of ‘Mediterranean noir’ might one surpass that of ‘Nordic noir’, Forshaw disagrees. “While the first flush of excitement may be dying down,” he says, “and there is no longer a tidal wave of material, there are still some first-class creators at work in every Nordic country, many of them yet to be translated.” Forshaw believes that, because Brits are closer in temperament to Scandinavia than they are to the Mediterranean countries, ‘Nordic noir’ will always exert more of a pull. “Brits love to watch Montalbano relaxing in his Sicilian apartment, drinking coffee and eating delicious lunches, but it is not real life. ‘Nordic noir’ is very down to earth, but there is just enough that is exotic to render the tropes of its crime fiction fresh.”

BARRY  FORSHAW’s books include Nordic Noir, Death in a Cold Climate: A Guide to Scandinavian Crime Fiction and The Man Who Left Too Soon: The Life and Works of Steig Larsson. He also writes for various publications and is a crime fiction pundit for the BBC and ITV.