The Lady from the Sea has been adapted to a contemporary setting in a new production from the Norwegian Ibsen Company, performing in The Print Room at the Coronet…

Rarely in theatre does lighting stick in the memory. But in The Lady from the Sea, it shone through. As the curtain rises, the lights reveal a Hopper-esque scene. We look through across the stage, through French windows, into an entirely wooden, sauna-like house, and a family stringing up bunting; perfectly cast in a sharp – yet respectful – glare of sunlight.

The bunting is for a birthday celebration. Though, this being Ibsen, it is of course no conventional birthday. Dr Wangel and his daughters are celebrating the birthday of their wife and mother, who died some years previously. The family now live in with Wangel’s second wife, Ellida, an eccentric woman who brings her own heartaches. Ellida mourns both the death of her and Wangel’s child, who died as a baby, as well as the disappearance of a mystery lover who both fascinates and scares her. Ellida confesses this love to Wengel just as the lover returns from a long voyage, taunting her with the prospect of alighting.

Though the Norwegian Ibsen Company are, unsurprisingly, Norwegian, and most of the audience were Norwegian speakers, performing in London means they have translated much dialogue into English. Thankfully, a considerable portion remains in the original, with surtitles projected for anglophones like me. Having both languages was both enhancing and distracting. Constantly looking up to the surtitles meant facial expression was lost, quite literally, in translation. Going bilingual also meant Ibsen’s text had to be reworked to make sense. Doctor Wangel and his daughters have been made British expats in Norway: proficient in Norwegian but more comfortable in English. It was a subplot that was both unlikely and unexplained. 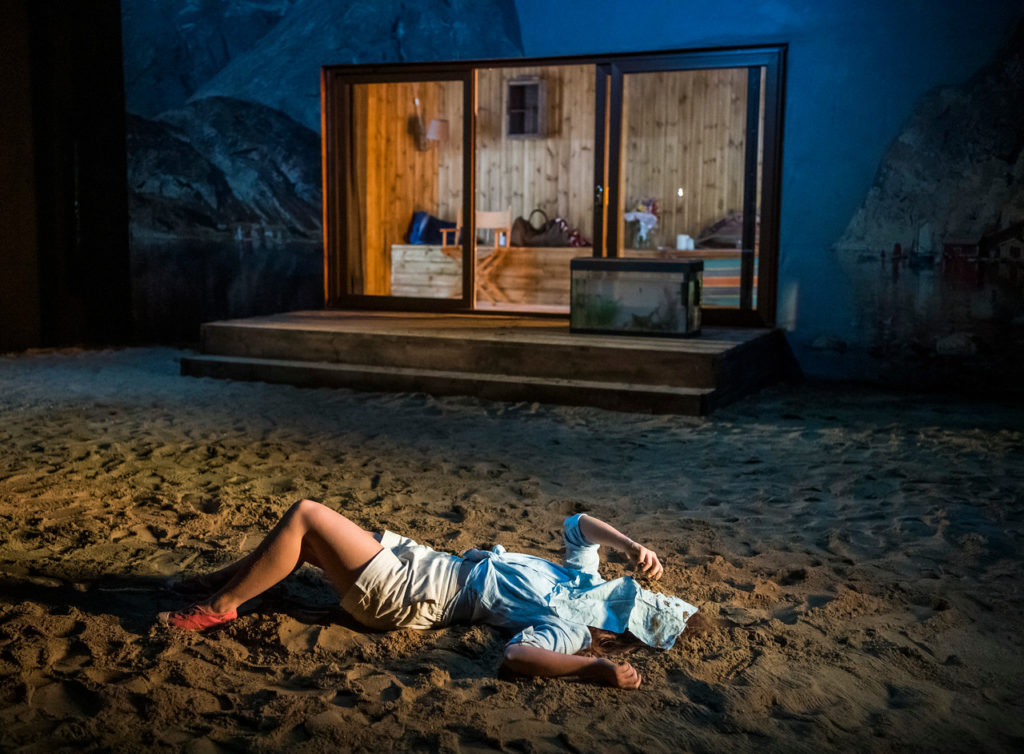 Molly Windsor as Hilde in the thick layer of sand covering the stage. The painted backdrop and wooden interior are visible behind.

After years taking small parts in Oslo, Pia Tjelta (Ellida) rose to fame in Norway last year, appearing in State of Happiness, which won two awards at the Cannes Festival. Despite weak English, her performance grew stronger in the second act. Of particular note is her handling of a confrontation scene with The Stranger at the end of the first act, during which he informs her of his intention to collect her later that evening. Coming at the end of the act, it would be easy for Tjelta to leave and allow the lights to fade. Bravely, she stays for longer, treating us to Ellida’s procrastination. The strongest performance comes from Kåre Conradi as Arnholm, a tutor brought in to coax Ellida from her misery. Arnholm misunderstands Wengel’s letter, assuming Wengel wants him to coax Bolette into marriage. This is a dilemma Conradi handles impressively. Having appeared in numerous English-language productions (most notably an episode of Shetland), Conradi speaks stronger English. Though, at times, it feels he is speaking to camera rather than an audience, his dialogue is always audible. His ability to break with naturalism when necessary – most notably when delivering desperate pleas of love to Bolette – is powerful.

The Lady from the Sea is blessed that the action takes place in one location, and on consecutive days. Director Marit Maum Aune has employed set designer Erland Birkeland to cover the front of the stage in a thick layer of sand, while a mountainous landscape – lit appropriately to suggest different times of day – has been painted above the doorway. By staging the action on the beach, we feel part of the sea’s mysterious lure; a lure that explains Ellida’s pull both to The Stranger and the region of her birth. The sand is, of course, not only employed to establish a sense of place. It is used also to slow the action and, most powerfully, it is used as a prop. At the beginning of act two we watch Ellida sculpt the figure of a baby from the sand and cuddle it, and later we watch Hilde bury her head with it in despair. These are beautiful uses of a minimalist, structured, and beautiful set, only enhanced by unexpectedly beautiful lighting.

The Lady from the Sea is playing now at The Print Room in London.