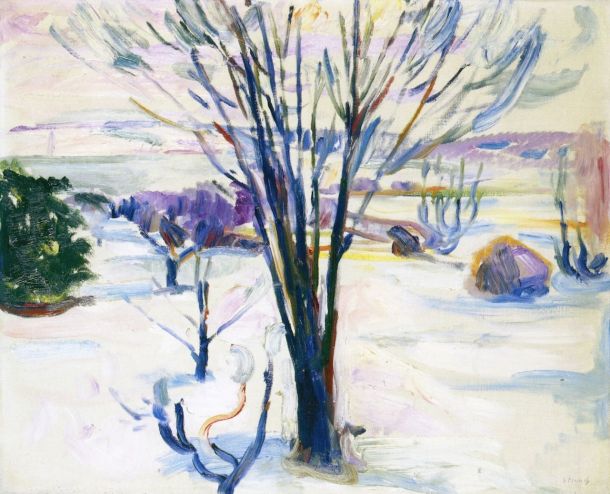 The art of Norway has been one of the country’s best-kept secrets. But that’s changing, says STELLA GRACE LYONS…

Raw, untamed nature. Glittering fjords. Biting winters. This what Norway is known for. But rarely its art. Only one Norwegian artwork has reached the lofty heights of ‘global masterpiece’. And everyone knows it. It’s so popular it even exits in emoji form. It’s Edvard Munch’s tormented Skrik (The Scream). Norwegian painting is art history’s best-kept secret. This is arguably because the country has only recently in history been perceived as civilised. During the Renaissance, Scandinavia was seen as a frozen wilderness teeming with witches ans sea serpents. This was partly due to a text produced by a naive but well-meaning Swedish priest, Olaus Magnus, who in 1555 wrote A Description of the Northern Peoples. He hoped his book would educate Europe about the customs of the Nordic people. Instead, its nightmarish illustrations of trolls and frozen wastelands whipped southern Europe into a frenzy. Scandinavia was written off as a backwater.

The ominous perception of Norway continued. It was excluded from Kenneth Clark’s 1969 Civilisation series and British galleries have largely ignored Norway’s contributions to the artistic world. That is until recently. The popularity of all things Scandi has led to a re-examination of Nordic art, with several exhibitions focusing on Norway. In 2014 The National Gallery held an exhibition of Peder Balke’s work, and Dulwich Picture Gallery have held exhibitions on Nikolai Astrup and Harald Sohlberg in 2016 and 2019 respectively. Norwegian art is justifiably being exposed to a new set of admirers. 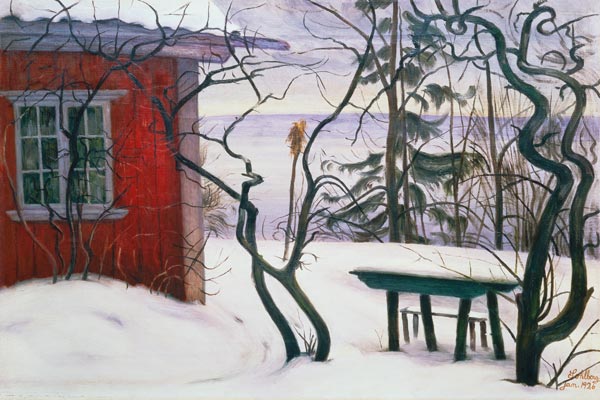 “The popularity of all-things Scandi has led to a re-examination of Nordic art, with several exhibitions focusing on Norway”

Norway’s Golden Age begins with one man, the father of Norwegian painting, Johan Christian Dahl (1788-1857). Born into humble beginnings, Dahl’s talent was quickly recognised. Norway didn’t have an art academy, nor a national gallery, so Dahl travelled to Copenhagen in the hope of honing his skills. His visions of Norway are vast, iconic and majestic. But they are more than just beautiful landscapes. They are nationalistic statements; explorations of just what it meant to be Norwegian at a time when Norway was grasping for a national identity. Dahl’s Norway was one that had passed from centuries of Danish rule to, in 1814, union with Sweden. Norwegians in the nineteenth century questioned what set them apart from their neighbours, and art was a perfect vehicle to explore these concerns. In Vinter ved Sognefjorden (Winter at the Sognefjord) a baunta (Viking memorial stone) stands proud in the snow. The sentiment is hopeful; that Norway will once again rise to glory. In the mesmerising Fra Stalheim (View from Stalheim) national pride is particularly evident. Sunlight erupts through dark clouds into the fjord. The power of tnature is contrasted with snapshots of daily life. A double rainbow, a symbol of hope, awakens those below to a new national identity.

Dahl shaped Norway in paint and other artists followed. Adolph Tidemand (1814-76) and Hans Gude (1825-1903) collaborated to create paintings that portrayed local folk traditions. Brudeferd i Hardanger (Bridal Procession on the Hardangerfjord) is the best known of their joint works and shows a jubilant celebration. Crystalline water glimmers below the colourful bridal party. Perhaps Dahl’s most memorable pupil was Peder Balke (1804-87). He explored the peripheries of Norway, travelling as far as the North Cape and interpreting the land in brooding and formidable works that pit man against nature. Significantly, he was one of the first artists to define the aurora borealis in paint. These visionary experiments were ahead of their name, and his progressive works didn’t sell.

Towards the end of the century, Norway still hadn’t gained independence. Neo-Romantic artists continued Dahl’s nationalist agenda by painting their homeland in works imbued with mystery and symbolism. These artists cared less about topographical accuracy and more about evoking emotion. The artists of the Fleskum Colony created quiet and delicate works that focused on the crisp and pale Nordic light, such as Elif Peterssen’s 1886 Summer Night. Expressionist artist Edvard Munch (1863-1944) was a significant contributor. His sensuous lines convey his homeland in numerous forms; a mystical land in Stjernenatt (Starry Night) and light-bathed fjords in Solen (The Sun).

A contemporary of Munch’s, Harald Sohlberg (1869-1935) is perhaps the most visionary and magical painter you’ve never heard of. He translated the landscape around him into poetic and lyrical visions showing glowing sunsets, a lone fisherman’s cottage and fields of daisies as delicate as lace. His distinctive style involved glazing and building up layers of paint. And the resulting paintings emit light so strong they practically radiate. Sohlberg’s crowning glory was his 1914 Vinternatt i Rondane (Winter Night in the Mountains). Never has an artist made such spellbinding use of the colour blue. The landscape is still and strangely spiritual. Sohlberg commands the viewer to worship nature. He made several versions, originally including human and animal presence, but his final choice to omit both results in a painting that arrests the viewer. Once experienced it never leaves your memory.

By the time Sohlberg finished Winter Night in the Mountains, Norway has achieved independence. The growing sense of nationalism during the nineteenth century had led to an explosion of artistic achievement. The Romantic paintings were united by their ambition to showcase the beauty of the country, its traditions and the power of its nature. These artists demonstrated that their country was more than Magnus’s sea snakes and witches. Today Norwegian art is gaining in popularity, but art lovers can rejoice in the fact that there are still gems to discover.

STELLA GRACE LYONS is an artist’s model and runs art courses and tours.

This article has also been published in The Arts Society Magazine.