A star of Doomsday, Sex and the City and Men in Black 3, KARIN AGSTAM grew up in northern Sweden. She’s made the Big Apple home, and in October opened Brasserie Saint Marc, a new restaurant in Brooklyn’s East Village…

You’re from northern Sweden, but you’ve spent much of your career in New York. Tell us about life there.

Well I’d started my modelling career before I moved to New York. But it was in New York I discovered nightlife. My then-partner and I opened a night club and sports bar, and it wasn’t long before we got the chance to open a small restaurant in Williamsburg. The restaurant was called Station, we did it on no budget and we learned a lot. But I was sure we could go bigger, so I began to see Station as a sketch for Brasserie Saint Marc, which opened in the East Village last year.

When designing Brasserie Saint Marc I believe you wanted to keep the building as close to its nineteenth century aesthetic as possible?

Yes. Many of the rooms we could return to exactly how they were, according to the photographs we found, though some of the other rooms proved more difficult.

Moving from rural Sweden to New York must have been tough?

Well my first spell abroad was in Paris, which really introduced me to the wider world. But, having lived in Paris, when I came to New York everything seemed like a bad suburb. I was looking at apartments in Chelsea and thinking ‘I can’t possible live here!’. Overtime, however, I’ve grown to appreciate the fact that New York is ever-changing – you leave for a week and everything has been torn down, there’s a new school, your street is a building site… It took time to come to terms with, but I’ve grown to love it. 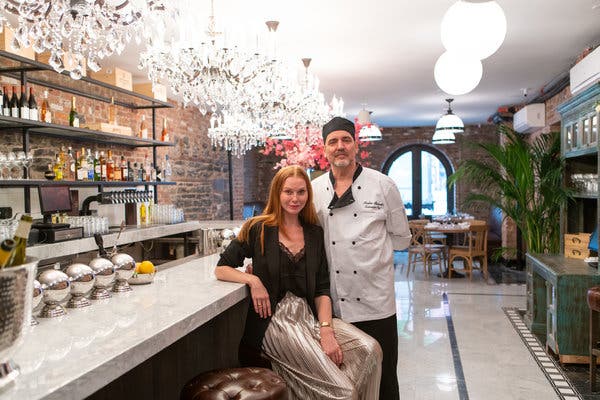 Do you feel more at home in America than Sweden?

That’s an interesting question, and one I’ve thought about a lot recently. I think I’ll never stop feeling at home in Sweden, but I feel equally at home in New York. It’s OK to feel at home in more than one place.

You’ve worked in film, theatre and television. Which medium do you feel most comfortable in?

I love it all. I love being on stage, but there’s also a certain magic creating film. I’ve been lucky enough to be part of producing and writing film and television, and I love seeing a project through all these stages. In theatre, you’re only an actress, however intensive that role is in itself.

Is Brasserie Saint Marc intended to be a home for creatives like you?

Absolutely. I feel happiest when I leave a show late in the evening on a summer night – the air vibrates and you feel high on what you’ve just experienced. So I wanted to create somewhere people could go after a show and just sit and talk for hours about what they just witnessed. When I was a student I spent much of my time doing just that: sitting in cafés discussing shows that changed me.