Max von Sydow was the actor whose distinctive, ascetic features did more than anything to put the films of Ingmar Bergman on the international map. He was an inspired choice to play the world-weary knight in Bergman’s The Seventh Seal (1957), back from the Crusades to find a world that God seemed to have abandoned. As he engages in a chess match with Death, von Sydow epitomises the fears of mankind facing a future where destruction – through plague, famine or nuclear war – seem the only certainty. This role was the model for many of his later performances for Bergman, who was apparently unable or unwilling to acknowledge other aspects of his personality. For Bergman, among other roles, he played a husband despairing of his wife’s schizophrenia in Through a Glass Darkly (1961), and a fisherman in fear of a nuclear holocaust in Winter Light (1963); in Shame and Hour of the Wolf (both 1968) he played artists suffering in worlds where faith, hope and certainty had gone Awol.

So is there a God? In Bergman’s world the question remained open, which is why von Sydow’s tortured face, bearing witness to long nights alone with a silent deity, seemed the very image of modern doubt and malaise. Once, Bergman actually confronted the problem in The Magician (1958), where he cast von Sydow as a mesmerist apparently possessed of miraculous powers, but who may, or may not, be a sham. Sporting a thick, black, biblical beard, this was Christ as near as make-up could imagine. An open ending left the question of whether he was a fraud tantalisingly unanswered. Either way, von Sydow’s ability to convince the audience that he resembled Jesus was never in doubt. Which is clearly why the Hollywood director George Stevens picked him to play the part of the Messiah in his 1965 film The Greatest Story Ever Told. Though the film was dismissed as worthy but dull, this was the role that for von Sydow opened the international flood gates. For forty years thereafter he was never out of work and was first choice for key supporting roles (often as villain) by directors in the US and Europe. 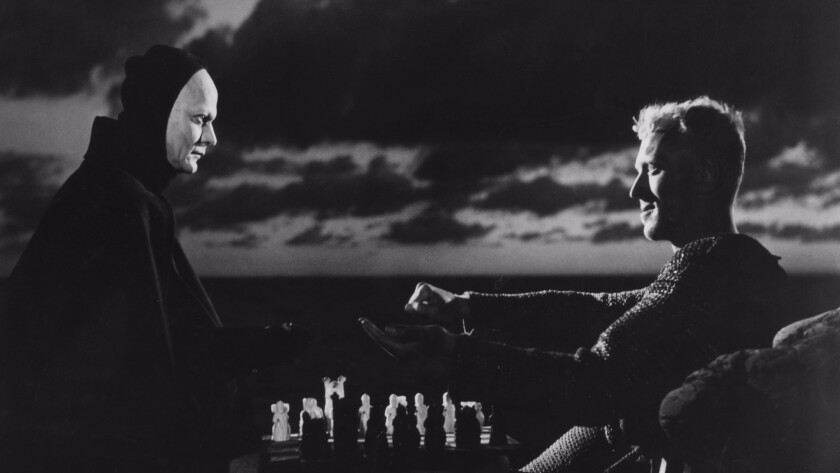 As Death in The Seventh Seal

Max Adolf von Sydow was born on 10th April 1929 in Lund. His father was a professor of comparative folklore, while his mother was a schoolteacher. He was educated at the city’s cathedral school, where he took part in plays. He completed his National Service in the army then enrolled at Stockholm’s theatre school, where previous students had included Greta Garbo and Bergman. While still studying, he had bit parts in the films Only a Mother (1949) and Miss Julie (1951), Alf Sjöberg’s admired version of the Strindberg play.

In 1951 von Sydow joined the Norrköping-Linköping Municipal Theatre for two years, appearing in nine plays, including Peer Gynt, before moving on to the Municipal Theatre in Hälsingborg. He stayed there for another two years, playing 11 parts including Prospero and the title role in Pirandello’s Henry IV. From there von Sydow went on to Malmö, where he stayed for five years. The chief director at Malmö was Ingmar Bergman, who directed von Sydow in Tennessee Williams’s Cat on a Hot Tin Roof, Peer Gynt, Molière’s Le Misanthrope and Goethe’s Faust. It was during this period that von Sydow first appeared in a Bergman film – The Seventh Seal.

As at the theatre in Malmö, actors were expected to alternate lead and supporting roles, so Bergman next cast him in bit parts in Wild Strawberries (1957) and Brink of Life (1958), before awarding him the quasi-Messianic lead in The Magician. He followed this with one of the most powerful performances in his entire career, in another medieval tale, playing the father of a girl raped and murdered in The Virgin Spring (1960). He vows bloody vengeance on her killers, and the scene in which he flagellates himself with birch wood in preparation for vengeance achieves a power and conviction almost more lacerating than the rape itself. This was a Max von Sydow tougher than audiences had hitherto suspected. 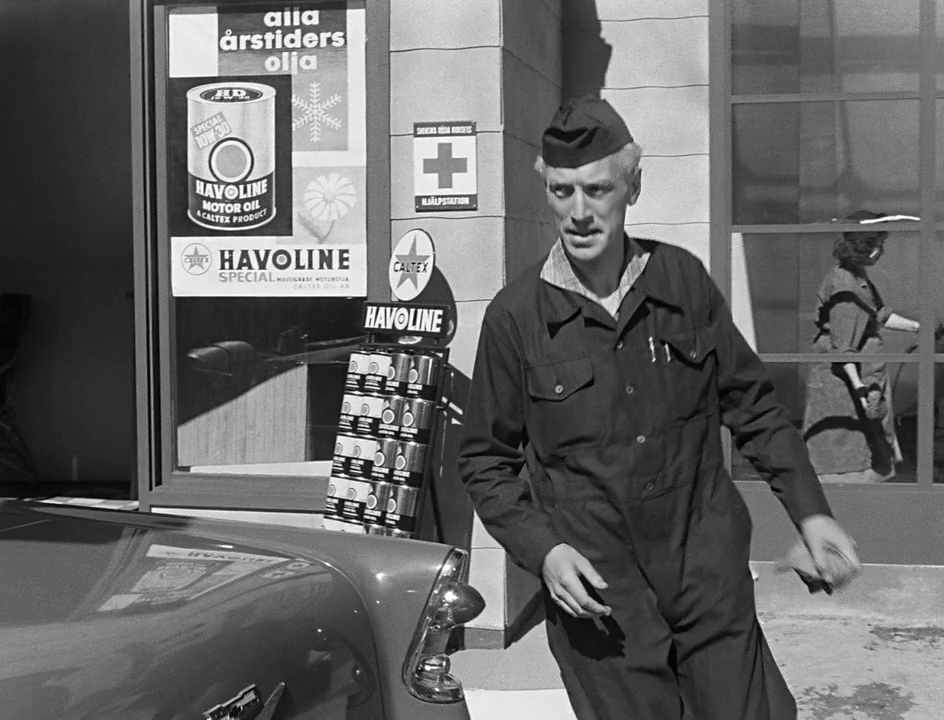 He also worked in Swedish films for other directors, but the breakthrough was in 1965, when he was chosen to play Christ – a role he accepted against the advice of Bergman. This required six months’ preparation at UCLA, learning to speak ‘mid-Atlantic’ English – an evident nonsense since Jesus would not have spoken English at all, let alone a mid-Atlantic variety. The Greatest Story Ever Told led to two more Hollywood pictures, the would-be blockbuster Hawaii and the much smaller The Quiller Memorandum (both 1966). Hawaii featured the actor’s two sons in small parts and focused on the undesirable consequences of the arrival of 19th century missionaries in the South Seas. Audiences never warmed to the tale and the film flopped. In The Quiller Memorandum, von Sydow played an ex-Nazi. It identified a hitherto unexplored strain in his cinematic personality that was to stand him in good stead in later villain roles, such as the sinister mastermind in Steven Spielberg’s sci-fi fantasy Minority Report (1992).

In the mid-1960s, von Sydow returned briefly to the stage. Joining the Royal Dramatic Theatre in Stockholm, he played the lead role in Arthur Miller’s After the Fall in 1965, directed by Bergman, and in 1968 played the father in a television version of The Diary of Anne Frank. In the 1970s Max von Sydow starred in the film that seemed likely at the time to be his best remembered role: the priest assigned to fight the Devil in The Exorcist (1973). Though it is actually a small part, it was a memorable cameo, which he reprised in the 1976 sequel. After this he became less careful in his choice of pictures, apparently paying more attention to their supposed box-office potential. In 1984 he agreed to appear in David Lynch’s film of the science fiction fantasy Dune, then one of the most popular novels of its kind. It proved a fiasco, pleasing none of the novel’s many readers and administering a setback to Lynch’s rising reputation.

It was one of a number of ill-advised excursions into science fiction made by the actor in the 1980s and 1990s. The 1980 remake of Flash Gordon, in which he played the ‘heavy’, Ming the Merciless, was by common consent the low point of his career, though Judge Dredd (1995), based on the comic strip, runs it close. His forte was small but telling cameos and character roles. Among these were his contributions to Woody Allen’s Hannah and Her Sisters (1986); Awakenings (1990), supporting Robin Williams and Robert de Niro; and Snow Falling on Cedars (1999). A personal triumph was his role as the father who emigrates from Sweden to Denmark in search of a better life for his son in Pelle the Conqueror (1987); he was nominated for an Oscar, though he did not win. Only once tempted to direct, von Sydow chose Katinka (1988), a personal favourite based on the novel by Herman Bang. Politely received, it did not encourage him to repeat the experiment. 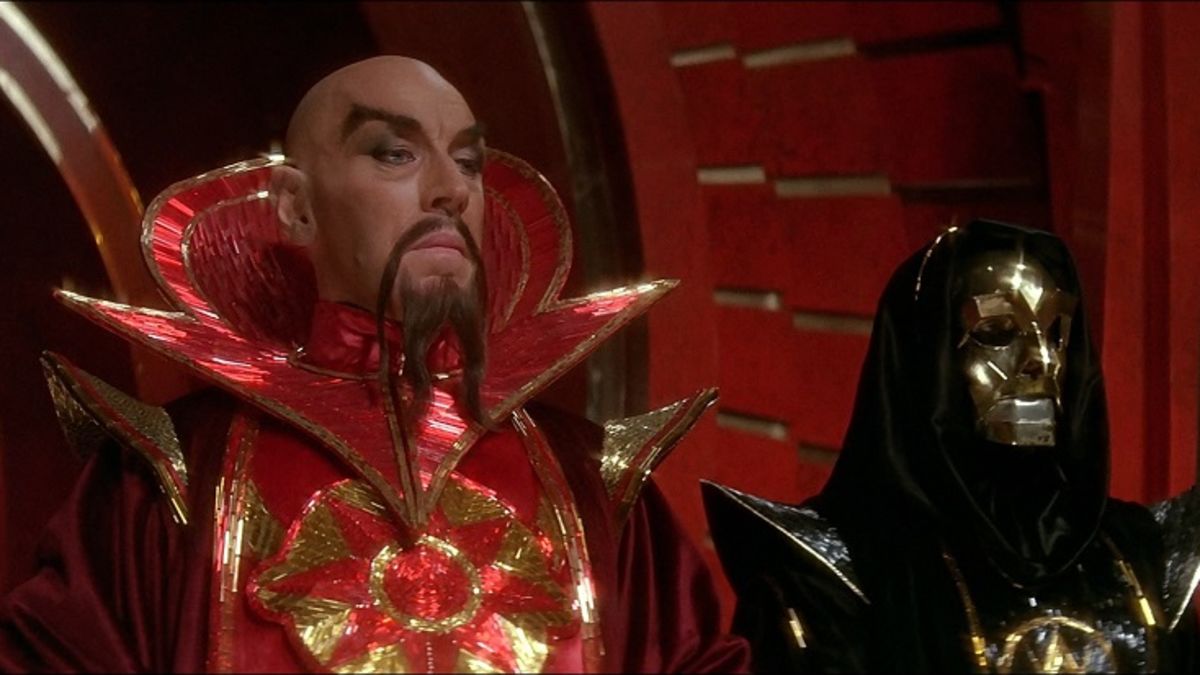 As Ming the Merciless (left) in Flash Gordon

In 2002 Sydow had one of his biggest hits, alongside Tom Cruise in Minority Report, and two years later he played Eyvind in Curse of the Ring, a television adaptation of The Ring of the Nibelung. The show set ratings records and was released in the US as Dark Kingdom: The Dragon King. In 2007, he starred in the hit Rush Hour 3, and the same year played the father of the stroke-damaged hero in Julian Schnabel’s The Diving Bell and the Butterfly, based on the memoir by Jean-Dominique Bauby. His later film and television work included The Tudors (2009), and the following year Martin Scorsese’s adaptation of Shutter Island and Ridley Scott’s Robin Hood, as Robin’s blind stepfather Sir Walter Loxley. He appeared in The Simpsons in 2014, Star Wars: Episode VII – The Force Awakens in 2015 and three episodes of Game of Thrones, as Three-Eyed Raven, in 2016. The following year he was in Thomas Vinterberg’s Kursk, based on the story of the infamous submarine accident. His final role was in Echoes of the Past, about a Nazi massacre in Greece, which was in post-production when he died.

Max von Sydow married the actress Christina Inga Britta Olin in 1951. There were two children, Clas and Henrik, who appeared with their father in Hawaii as his sons at different ages. Von Sydow and Christina divorced in 1979, and in 1997 he married the French film producer Catherine Brelet, becoming a French citizen in 2002.